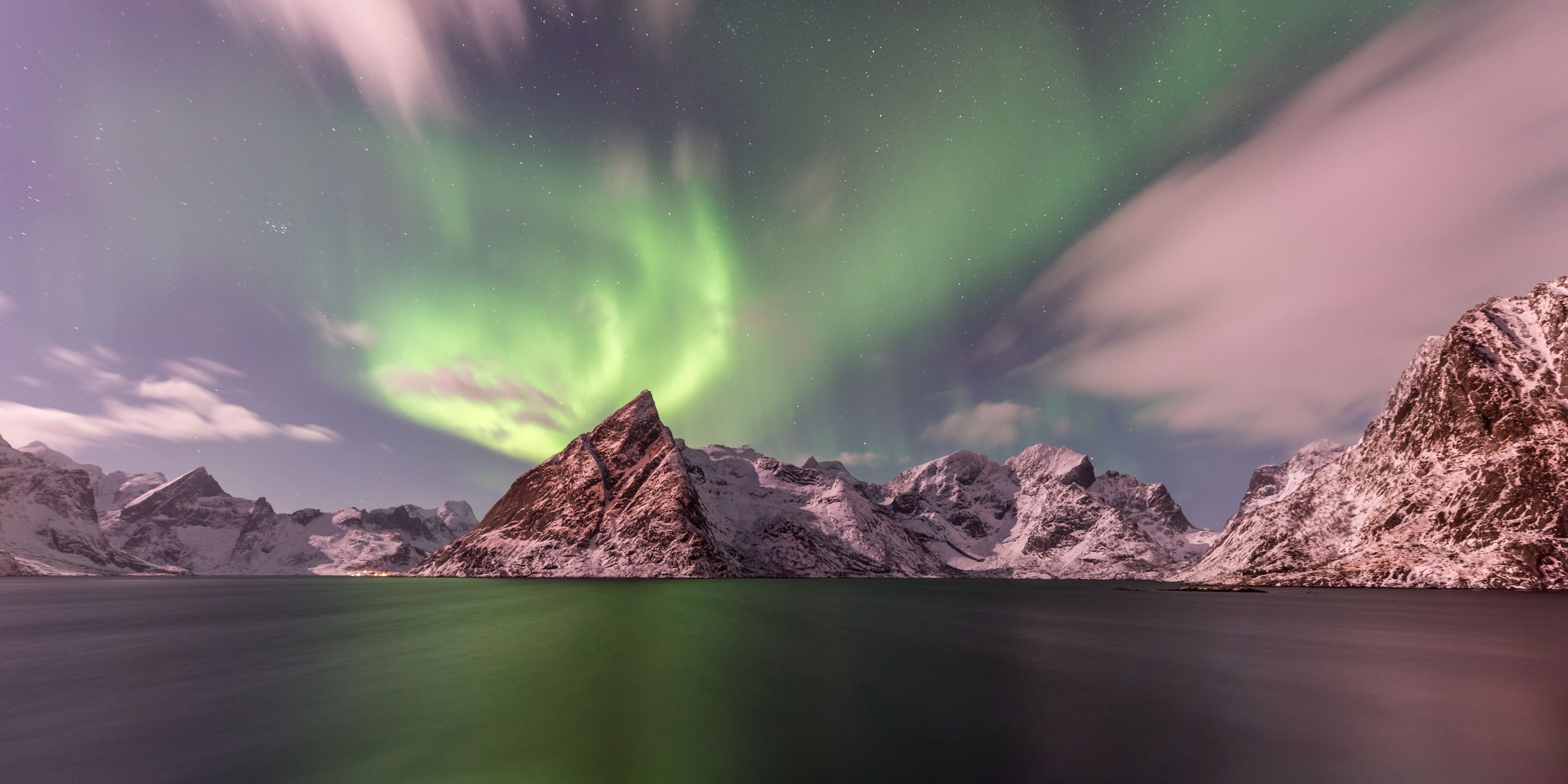 Due to the pioneering adventures of a few, the Lofoten Islands have become a winter magnet for landscape photographers. Light has begotten this new pilgrimage. And February is the high season. The month commences with 5 hours of daylight and ends with 10. The arc of the sun is low with the potential for casting rich light throughout much of the day. Infuse this winter light with landscapes of jagged, snow covered peaks abruptly enclosing a populated archipelago of fishing islands and you are presented with endless compositional possibilities. The brightly coloured waterside cabins or “rorbuer” add an extra special touch. It’s almost though Lofoten has been created by Pixar for landscape photographers. However, Lofoten very much retains it’s functional, fishing roots.

From beyond Norway, a visit to Lofoten involves 3 flights: to Oslo, Oslo to Bodo and the short, propeller plane hop from mainland Norway to Leknes. It’s a long day, so on arriving in the tiny, informal airport it was a relief that the car rental representative had one customer and one car. We were upgraded to a jeep, parked just outside the terminal building. Not far on the way to our first destination Hamnoy, we mustered the energy to push a trolley through the REMO1000 supermarket. A 45 minute drive later, we were unpacking in the most homely, wooden lodge or “rorbuer” one could imagine – partially perched on stilts at the water’s edge beneath the looming presence of Festhelltinden mountain. Unquestionably the most breathtaking location at which I’ve ever stayed. 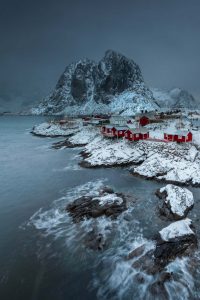 The short (10km) stretch of narrow road between Hamnoy bridge and A (pronounced Oir) is undoubtedly one of the most stunningly beautiful places on Earth. Photographically, 3 nights allows a light scratch of the surface. The village of A is largely closed to tourists in February. You could spend a day photographing the rorbuer cupping the harbour here. But we were on the hunt for a view of distant peaks, coastal rocks and swirling sea. Initially I couldn’t find the location, but a closer inspection of Google maps brought us to the campground and a narrow path leading to rocky shore. Heavy clouds and snow enhanced the scene, the sea was swirling furiously at my feet. I left very much contented with the images taken in camera but at home they appeared static and lifeless, the very opposite of my time there. 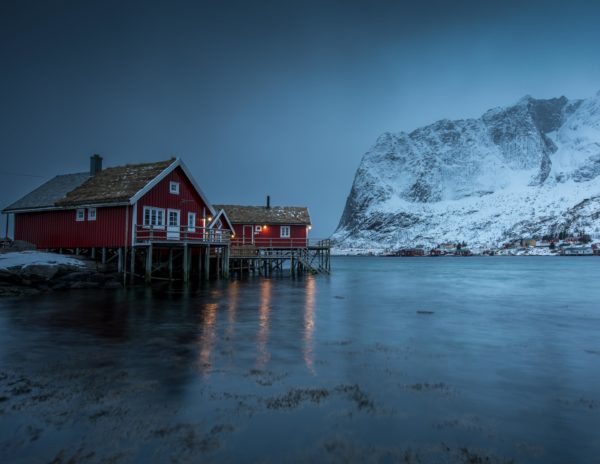 Cloud and snow descended as we drove back to Hamnoy. I had noticed two rorbuer on the way that had photographic potential but waited to come back towards the end of blue hour. The lights were switched on outside as dark clouds enveloped the mountains. Delighted with the image I made my way back for the evening.

It snowed lightly all night. The morning shot at Hamnoy was stark – darks and whites. I had seen excellent images taken beneath the bridge but I had forgotten to venture there. Onward to Sakrisoy. 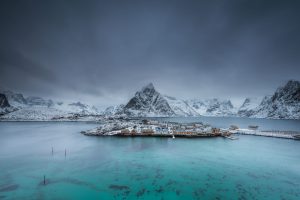 The sky was heavy and brooding as I negotiating my way through thick snow up the gentle hill that overlooks the island. There is no foreground per se needed here but I used the 3 flagpoles in the bottom left third to compensate. Bluish tones in the sky gently contrast against the topaz hues of the water. Delighted again but the weather was about to change for the remainder of the trip. Dreaded blue skies – blue indeed.

Skagsanden Beach and it’s nearby red church is one of the closest north facing beaches most accessible to Hamnoy. The afternoon sky was cloudless and an icy wind bore sand into the air making the business of setting up a tripod, camera and filters challenging. The adjacent mountain makes a perfect backdrop and it’s reflections in the water leave little else to think about whilst composing an image.

Nonetheless, no matter how special a place is nothing compensates for poor light. In retrospect, we should have stayed here for sunset but on the other hand discovering new places when on a trip like this is an urge that is hard to resist. We did not leave the car at Myrland nor Storsandnes beaches, the light being so uninviting.

On our final evening in Eliassen Rorbuer, I drove the short distance to a roadside parking space at Toppoy overlooking Ostind and waited and waited some more. 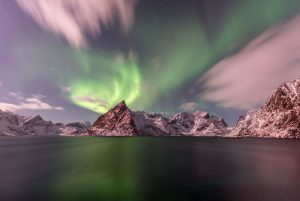 Aurora activity  was forecast as low and this was bourne out by the faint green washes in the sky above the impressive peak. Shortly before 1am activity increased – centred over the summit of the Ostind. A simple image but one of my favourites of the trip.

Prior to leaving for Ballstad for the second half of the trip, I joined many other photographers at the main viewing point over Reine as the sunrise cast a subtle glow over the peaks. The view was astounding but the experience of standing toe to toe, tripod to tripod reminded me of the rare bird twitches that I have steered clear of for many years. So I took the shot, returned for breakfast, we packed our bags and wondered where 3 days had disappeared to. 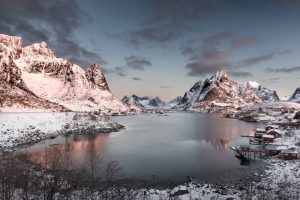 Bright sunny days and clear nights as a quarter moon was waxing made daytime photography frustrating and brought expectation of aurora at night. The challenge with such a trip is managing to stay awake! On the first morning I made the pre dawn 25 minute trip from Ballstad to Haukland beach.

A faint orange tinge above the horizon provided a little counter balance to the blues reflected on the sea and mountains cupping the small bay. A partially frozen stream provided a leading line. It froze my tripod to the spot and the legs would not extend for the rest of the morning! Another hazard of photography at these temperatures is that iPhones also freeze up when exposed to the cold so limited video for reference was captured. 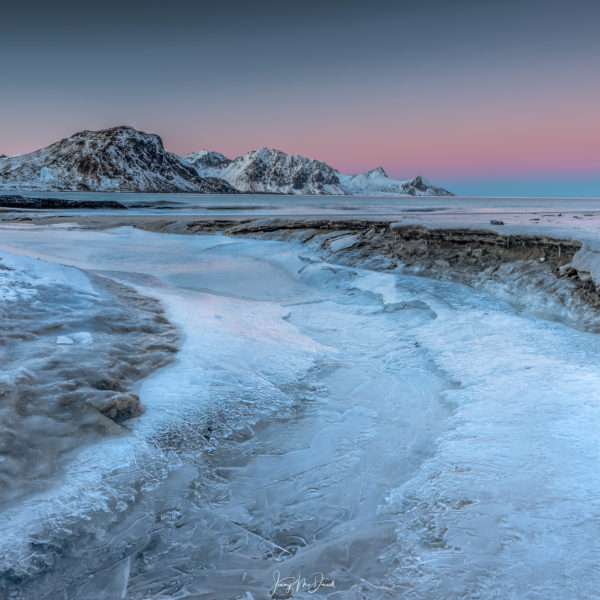 Additionally, I found myself with no water, the bottle I brought froze and when I got back to the car (2 hours), a bottle left in the warmth of the passenger seat also froze solid!

An impressive tunnel connects Haukland with Uttakleiv beach and I made a brief visit here. The temperature plunged again and when damp gloves started to freeze to my hands I was forced to run back to the car clapping furiously. Homeward bound. We spent the second 3 nights in Hemmingsgodden Lodge, Ballstad. Anna, our host, left a full, filleted cod in a neat cardboard box on our doorstep – fridge not needed? The afternoon brought us to the surf beach of Unstad and sure enough the water was teeming with hardy souls as we donned 3 pairs of everything and still froze. I found a composition with rounded boulders roughly leading to where the sun was forecast to set – at the base of the imposing western mountain. 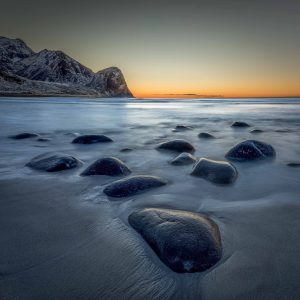 Although bracketing, the dynamic range was excessive – the idea sounded good but the end result was poor enough. Back home for poached cod – a hearty end to another great day on Lofoten.

The aurora forecast for that night was low, an early night beckoned but at 10.30 an alert was issued of a minor solar storm. A quick check outside and we decided to make the drive back to Uttakleiv. It was 1.30am before we left and were treated to a light show we will never forget.

As the next day was sunny, we made the stunningly beautiful drive from Ballstad to Henningsvaer, stopping off every now and then. 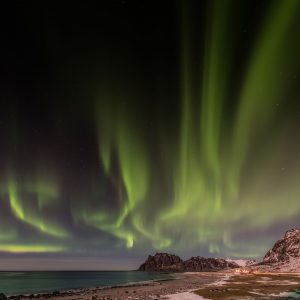 Our trip was at it’s end with the exception of an overnight in Oslo. As with every trip, a little luck, good and bad, the wisdom of heinsight and images that never match expectation are in the bag coming home but the memories – nought can hold a candle to good, old fashioned memories.