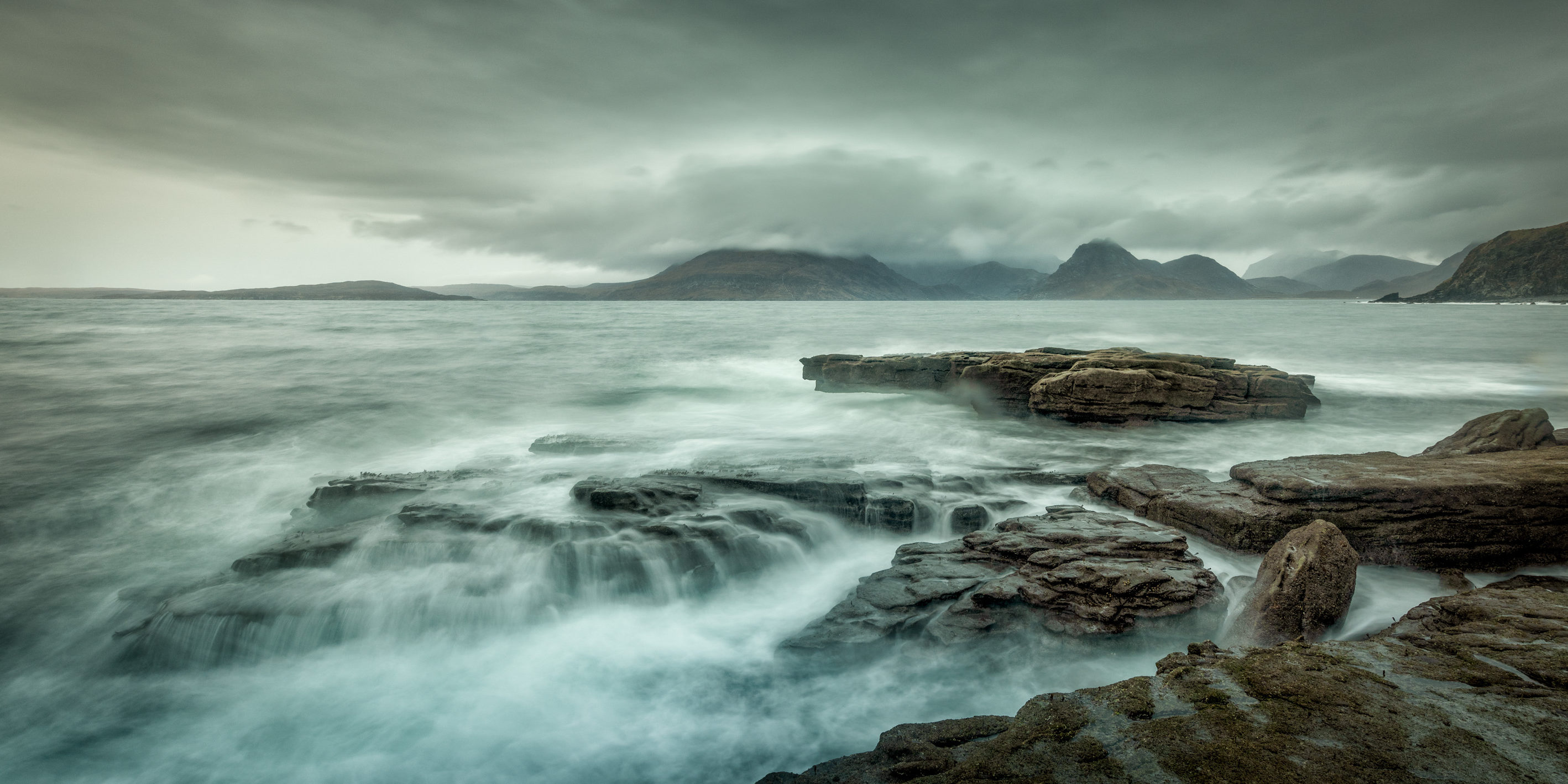 Skye is arguably the most popular and varied landscape photography location in Britain. And for good reason. The Old Man of Storr, the Quiraing, the Fairy Pools and Neist Point Lighthouse draw photographic pilgrims from around the world,
burdened with heavy bags filled with lens, filters and a tripod or two. These hardened, mostly middle aged souls pay penance in the form of crouched backs
whilst climbing peaks they should really stay off. But searching for spiritual enlightenment in the form of the perfect image is worth the risk of early decrepitude.

For this pilgrim, one place mattered most: the uncompromising seascape of Elgol. For Elgol I wanted no pinky, pretty sunset, no sky blue, no calm sea. Elgol was chiselled from stone to convey drama. Stormy seas, crashing waves on rocks of grand proportions, a threatening sky, rain (the horizontal form) and distant mountains struggling to emerge from dark cloud. As I drove the long, narrow road with a single destination at it’s end, the conditions looked promising. The car shook from side to side. It was 3 pm as I arrived at the pier, an hour before “sunset”. 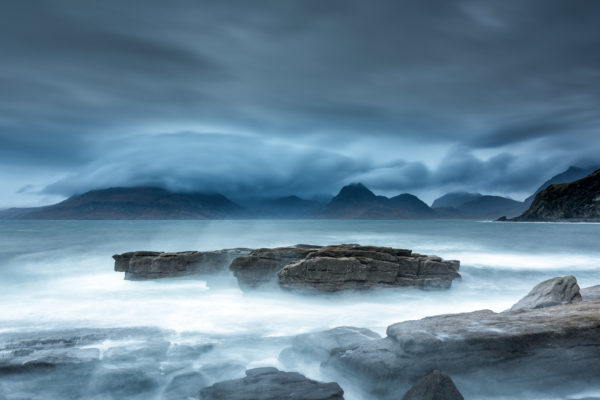 There were no other souls in watch. Waterproofs donned, I walked with anticipation to find a composition. It was two hours off low water. I found a gathering of mammoth rocks suffering a pounding from the heavy surf. I took limited shelter from wind and rain behind a large rock and gazed out on my composition to be. Eventually the rain eased enough to set up. I placed a dummy(damaged) filter over the lens to protect from rain and spray and measured the light to set an exposure time to capture water movement –
leaning towards less definition. I wanted the foreground rock to dominate the image with the Cuillin range a secondary but essential element – a looming presence. The mountains dipped in and out of visibility. Every other capture was destroyed by rain drops and/or sea spray but with persistence and a large cleaning cloth, the smudged image I squinted at in the small, cracked LCD display on my camera brought a smile and a sigh of satisfaction. A touch of ominous red would have been a bonus but the God’s were obviously drip feeding me for the rest of the trip.

. I stayed on the outer rocks until dark and enjoyed the most exhilarating photography since an afternoon in A, Lofoten earlier in the year. The two locations are in many ways similar in scope and mood. If this image and experience was all I brought home from Skye, the pilgrimage could be considered fruitful indeed. I had brought along a lapel mic and a Lumix camera to shoot some video or vlog and you’ll find my utterances embedded on this page. Elgol marked the end of my first day on Skye having visited the gushing waterfall at Glen Etive on the previous day in heavy rain, so let’s backtrack a little.

It was hard to resist stopping on the drive from Glencoe to Skye as both the scenery and light were impressive. But I did resist and my first stop was at noon at Eilean Donan castle. 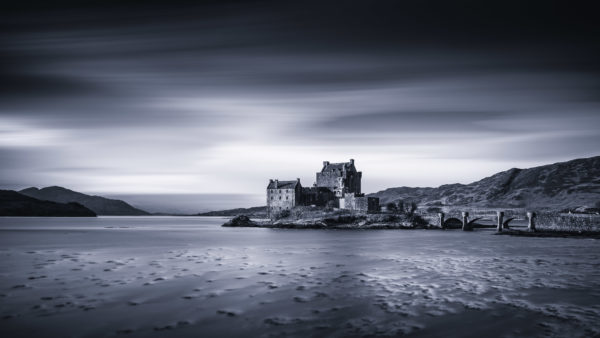 The light had deteriorated and was neither good nor bad. From the carpark, I took a 15 stop filter, the “Super Stopper” out with a black and white image in mind. Towards the end of the exposure, the light intensified on the castle. The image was slightly underexposed but all detail was preserved. The image is growing on me and in time may grow further or may be consigned to the archive – who knows!

For the next two days, I followed my plan rigidly. Day 1: Quiraing sunrise, Neist Point sunset. Day 2: Old Man of Storr sunrise, Fairy Pools sunset (more so to avoid the crowds).
The weather forecast for Day 2 was horrendous: sunny with blue skies and light winds. Staying in the Breakish area of Skye had the advantage of being a shorter access and get away point from Skye. It was also close enough to Elgol(40 mins). Other prime locations on Skye were a little further away.

My camera gear was soaked by rain and sea spray at Elgol, so cleaning and drying made for less sleep and a slow start the next morning. I reached the Quiraing with little time to spare to sunrise and set up adjacent to the car park.

The sunrise composition was quite simple and featured from right to left the folding landscape looking south east, the two lakes and the distant loch and mountains. I then moved on to the stunted tree that has become a defining image of the area. 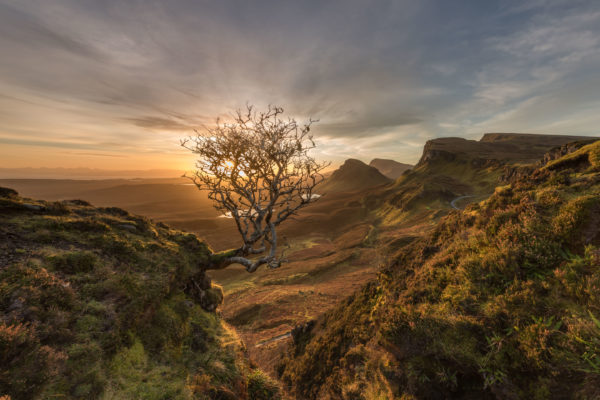 It is found in the 3rd or 4th gully facing east as you walk towards the “prison”. Descending to the level of the tree affords it a large portion of the image with a wide angle lens. It partially obscures the lakes below but I preferred the dramatic impact of this perspective. The early morning sun retained a richness that beautifully illuminated
the eastern facing hills of the Quiraing and I spent the rest of the morning picking off details and layers in the landscape mainly with a 135 mm lens.

The light deteriorated through the afternoon as I drove the western route across to Uig and onward to Dunvegan Castle.The landscape is not as appealing as the eastern route north from Portree. The castle was closed to access for the winter so I took refuge in the homely Dunvegan Hotel where the fish pie was delicious. After a short nap, Neist Point beckoned and no photograph of the promontory and lighthouse could prepare me for the sheer scale of what was before me. Most images are taken from a cliff a short stroll from the car park (to the right whilst facing the lighthouse). 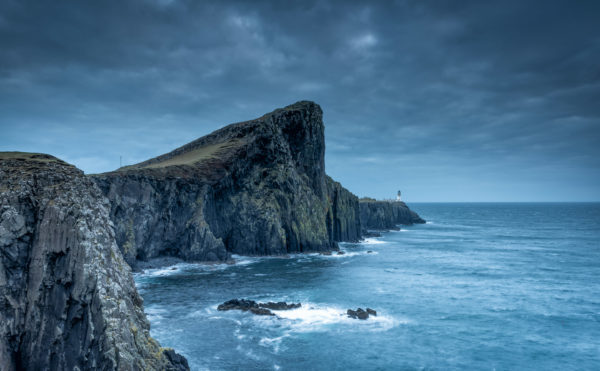 I chose to descend the steep steps to the promontory and walked through a gap in a dry stone wall to the cliff edge. Sunset was not noticeable, it was as if the God’s were very slowly turning a dimmer switch to night. With nothing of interest in the sky I turned to the play of water on rock far below the cliff for interest. As dark descended, I ascended to see one car in the car park and walked the muddy path in the half light to the main vantage point. Whilst setting up, my tripod took off and landed at the cliff edge (literally). I carefully retrieved it, took one image and called it a night. I deferred the climb to the Old Man of Storr until the last morning. A 4.30am start, an hour’s drive and a good hour’s hike brought me to a vantage point above and beyond the Old Man. I busied myself setting up and shot standard wide and 50mm panoramas before and after sunrise. My favourite image is a panoramic showing a pre-dawn, faint tinge of red running along the distant mountain line. It was a clear morning with no cloud and the image could be called non-descript if it wasn’t for the magnificent view.

But I preferred it to the many images I took as the sun broke the horizon and thereafter. After the descent, and the mixed words of encouragement and dread that I passed on to some of the many making there way up in daylight, I stopped awhile at a calm lake showing a perfect reflection of the mountain and took some more photographs there. The Sligagan Inn was a welcome respite as the morning’s exertions were taking a toll. I enjoyed a good lunch there. For both location and atmosphere, it is a perfect base. So onward to search for a specific waterfall I had seen an image of at the Fairy Pools. It was approaching sunset as I reached the first pools. A twenty minute walk on and the very last fall directly beneath the “cracked” mountain was the one – I recognised it immediately. Realising I had the whole valley to myself, I promptly set up at the pool, recorded a brief vlog and took some photographs. As there was no cloud in the sky, the images were always going to be reference shots. I was glad I had an opportunity to stand in the water alone beneath that mountain with a full moon rising. 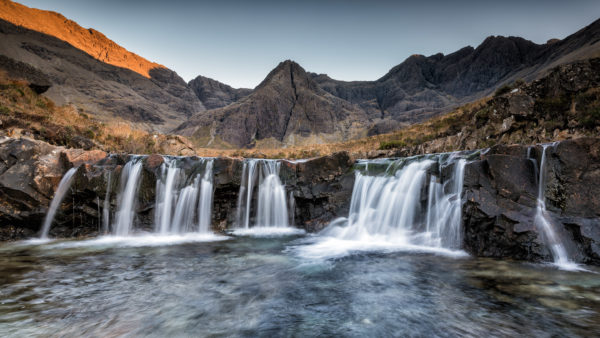 Eilean Donan marks the exit and entry point for most travellers to Skye. The new bridge seems incidental. And so my last sunrise image of the trip was bound to be here. I moved on to Glencoe stopping briefly in a valley along the A82 that was uniquely white with hoar frost. Bizarrely, no other place on the road to Glencoe was frozen. It was Sunday afternoon when I arrived in Glencoe. The mystique and wildness that enveloped the rain soaked landscape I had awed at 3 days previously was stripped bare by bright, white early afternoon light. Instead of rain, the glen was awash with day trippers and cars. I walked to Lochan Na Fola to capture the reflection of Etive Mor but the light was too unkind. A quick snap of Blackrock Cottage where the light was not so bad before making the final leg of the journey to Glasgow.

As I passed through Rannoch Moor the sun dipped behind a large peak and I climbed a mound to take another panorama. It’s a week later and as I write, edit video and sort through images, the memories of the trip are being hard written to memory – my biological one. It reminds me how important it is to record and preserve though as little adventures such as this are as rare as hen’s teeth. If you haven’t yet ventured to Scotland, don’t hesitate. It will not disappoint and if you have any questions, drop me a mail or leave a comment – I’d be glad to help out.