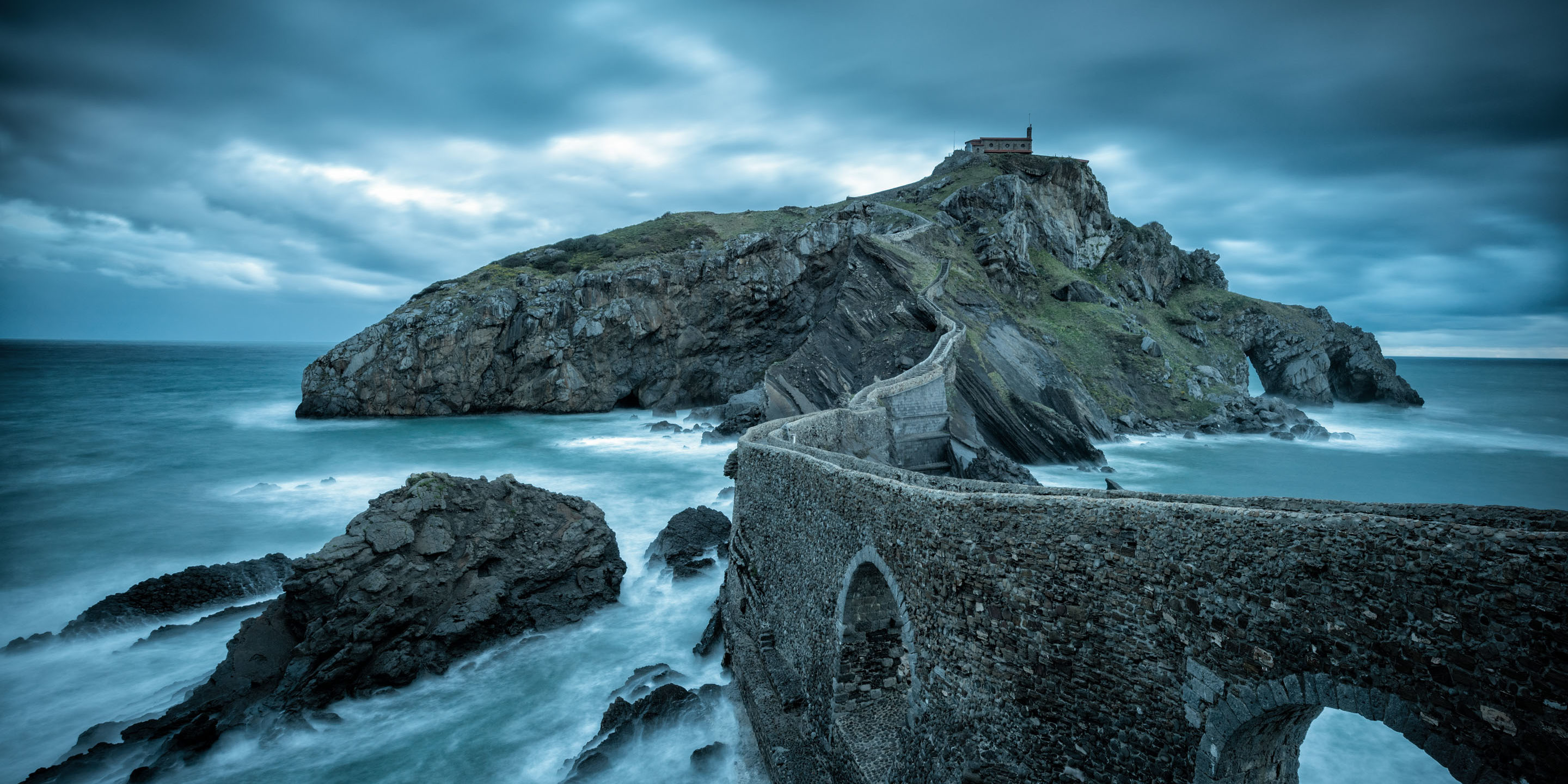 Time passes quickly. However, I had to pinch myself when I realised it was only two years since our last road trip through Northern Spain. Every day was an adventure on that trip with new locations to wow at every turn.The north of Spain was demanding attention and we were an appreciative audience.

A road trip may leave behind many places visited but few truly discovered. And so too it is with landscape photography – too little time to absorb, to compose, to wait for better light and the tide to turn. So I asked myself – will the next trip be any different? The answer was a resounding no  – new adventures and new photographic imperfections are a far more exciting proposition.

And so Bilbao, where we ended our last trip was our starting point, We worked our way west along the coast towards San Sebastien and then south to the Bardenas Reale in Navarre. The agenda was simply a holiday with some landscape photography thrown in for good measure or the other way around dependent on your viewpoint. A key point is the separation between holiday and photography – distinct and mutually exclusive, the former brings a rested soul, the latter 3 weeks of post processing activities and a nervous disposition.

Bakio is a short drive from Bilbao airport. Its relative proximity to Barrika and San Juan de Gaztelugatxe made it a good photographic base for both locations. After checking in to our hotel, we arrived in Barrika in good time for sunset. The renowned seascape feature of Barrika are the so called “dragon’s tail” rock formations. 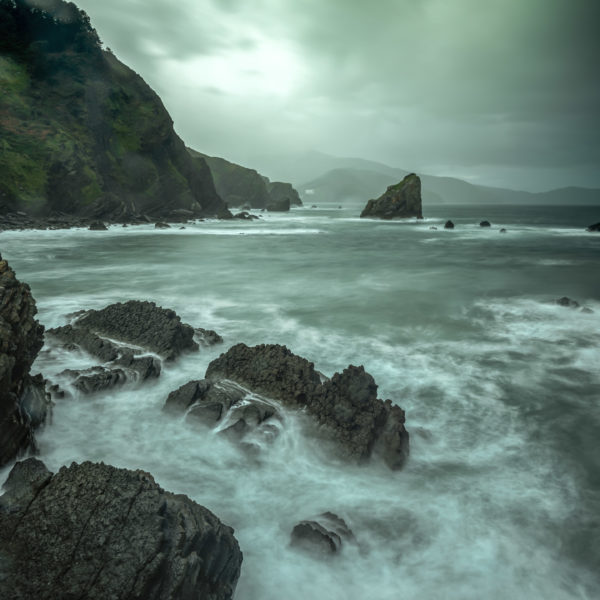 They are revealed on a receding tide. Sunset was two hours after high tide. At the end of blue hour there were no dragon’s tails to be seen.

We waited until blue hour ended and the light had fully faded. But the tide was going nowhere fast enough. There is little else worth shooting here. So if you plan to visit the beach, make sure you are there at least 3-4 hours after high tide, 1-2 hours after low tide etc. A panorama of distant Bilbao and heavy surf was the consolation prize on offer and I took it to justify having the camera out. The mist created by the surf and the image compressed by a long lens(135mm) does result in an atmospheric shot.

On the way to San Juan de Gaztelugatxe for the next day’s sunrise shoot, the potential of the beach in Bakio was evident as was the coastal area towards Gaztelugatxe. I did not have time to visit though. I parked beside the cluster of buildings at the top of the hill overlooking the island. It was still dark and it took me 20 minutes to find the pathway to the causeway – there is a big sign beside the restaurant but I walked right past it. The descent  to the causeway is very steep and my legs told me that the same path back would be even steeper – note to self – listen to legs in future. I packed everything including the drone and the kitchen sink but a wide angled lens and some filters would have sufficed. It is spectacular. It does live up to the hype. The photographic options are varied. However, it is not easy to compose an image – the cliffs and causeway prevent access to the sea for conventional seascape foregrounds. Heavy winds and rain prevented coloured, sunrise light but there was plenty of definition in the sky and the sea was swirling below.

To capture Gaztelugatxe and the causeway from arched bridge with ample sky in frame I had to take two 14mm exposures as a panorama. This version is black and white which worked quite well. There is a sea stack west of the causeway that is surely listed on a top 100 sea stacks in the world blog – as worthy a subject as Gaztelugatxe itself. So if visiting look for this and build time in to find the best location to photograph from. I did not.

We proceeded to the charming, surfing town of Mundaka and onward to Zumaia’s flysch rock formations. It is worth noting that the excellent Hotel Flysch is perfectly located for access to the beach and serves a great breakfast. There are a few options for seascape photography here. The first is a typically picturesque sunset shot looking west including the little clifftop church.

It did not appeal to me as a composition and the light was poor approaching sunset so I descended to the beach immersing myself and tripod in the surf – the most enjoyable hour’s photography of the trip. I took a number of images including the featured image in this blog and the portrait shot to the left which I do like but compositionally may not work as well as it could. As the tide receded I moved over to the ridges of rock that the beach is renowned for. However, it was now too far into blue hour to appreciate the ridges.

The following morning was forecast as having high cloud cover. I walked out along the spit of rock and exposed an image looking back towards the sun rising. The sky caught fire for a few seconds before the greyness returned.However,I preferred the image to the right  with better foreground. 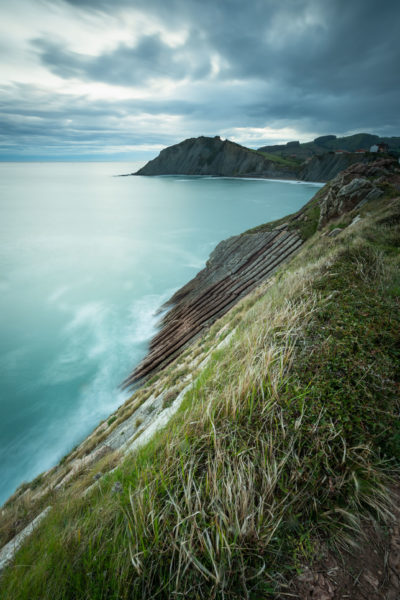 More flysch rock formations extend west.  I descended and took  a long exposure below. This would also make a good sunset location and is easily accessible.

So onward west for a 3 night stay in San Sebastien – time to put the feet up and relax.

There are two sculptures worth shooting one at either end of the beach.  But surprisingly, neither the town nor the beach compelled me to take the camera out. It was just too surburban. Neither did street photography hold much of an appeal for me as San Sebastien has none of the artisan appeal of say the back streets of Rome or the communal aspects of town life in other areas of Spain. I hope I’m not painting too gloomy an image of San Sebastien as it’s setting is very scenic and the gastronomic delights are not over-rated.

And so it was that we looked forward with great anticipation to the final leg of our trip – south to the Bardenas Reale, the largest desert in Europe. (I know – competition is as sparse as the landscape). We stayed at the Hotel Aires Bardenas, highly recommended where Griffon Vultures and Montagu’s Harriers were visible from the hotel room.

The park is comprised of the blanca, negra and the central plain areas – each quite different landscapes. 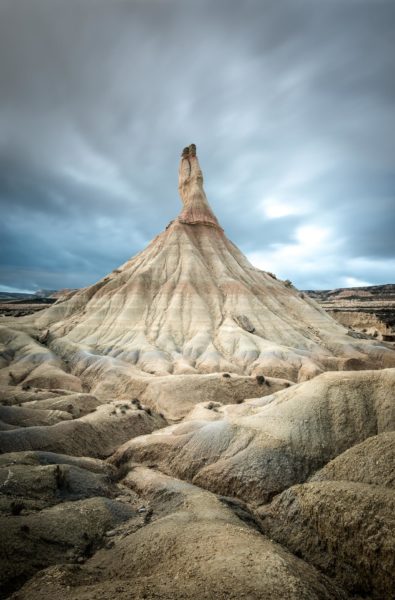 blanca area was the sole area visited with four trips over roughly the same route but at different times – sunset, sunrise, daytime and one attempt at astrophotography. The park is easily accessible by ordinary car along wide dirt tracks – no 4×4 needed and is open day and night.

Although the rock formations are stunningly unique, I struggled with finding compositions that worked well.

Nonetheless, the unique Castilltiera rock formation with shades of blue and red ensures that no photographer goes away empty handed.  I found a portrait image looking west worked best as there are some wonderful leading lines at this side. As Murphys law would have it as I approached the rock, God rays and epic dark clouds gave way to grey, wind and rain just as I found my composition. I took a long exposure to smooth the sky but the result was uninspiring.In this image, I have replaced the sky with another sky taken on the trip- something I have never before done – is this cheating? Maybe so, but it works well, I think and showcases the beauty of this unique rock outcrop.

Moving deeper into the park I searched for something a little different. As the sun was setting, I found two potential compositions on either side of the track. The first is comprised of rock formations illuminated in gold by the evening light with distant escarpments (left). 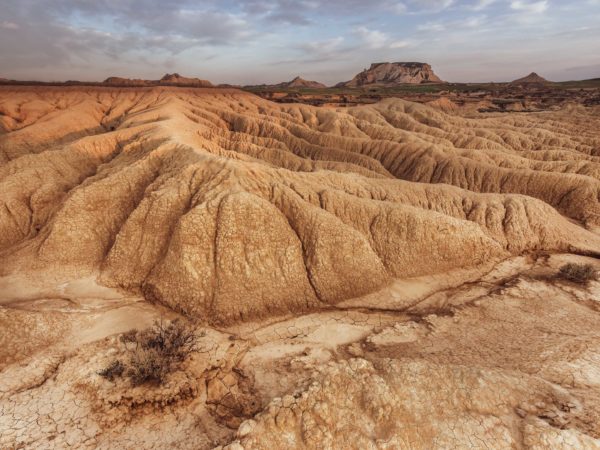 The second, looking into the sun, was a terracotta roofed outhouse and a walled enclosure packed with sheep. Time was not on my side as the sun was dipping below the wall. My angles were not good and the image lacked depth as all lines were horizontal including the rocks in the foreground – see below for illustration purposes – but it did have biblical potential!

The next morning I took a sunrise panaroma of the distant escarpments – a true sign that no composition of note was found in time for sunrise. The light turned white and the sky was cloudless and any ounce of creativity I was trying to muster was dampened by the conditions.

Whilst driving in the afternoon, red legged partridges, larks, Black-eared and European Wheatears were seen along with a sole Bee-eater. Roosting atop a high cliff, Egyptian and Griffon Vultures were picked out with binoculars.

Our last day. A 3am start. The Milky Way would arch over the Castilltiera shortly after midnight. However a half moon was setting at 4am. The 4am option was taken – a moonless sky with the option of a sunrise. However, I didn’t factor in the lights from the military installation in the park. 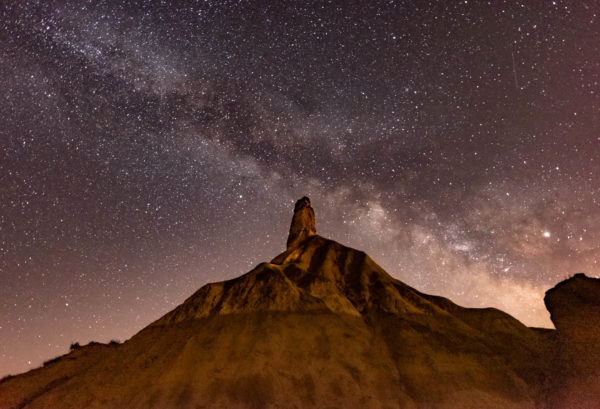 So, to capture the setting galactic centre without artificial lights I descended into a dried riverbed. But one compromise leads to another – perspective issues as the camera had to be angled upward. Nonetheless, the sight of the Milky Way in Bardenas Reale was a magical experience – alone and far away from any settlement, Eagle Owls called in the distance.

A small building stood out on the plains close to the hotel and I made a beeline for this for sunrise.It was taken with a 300mm prime lens. 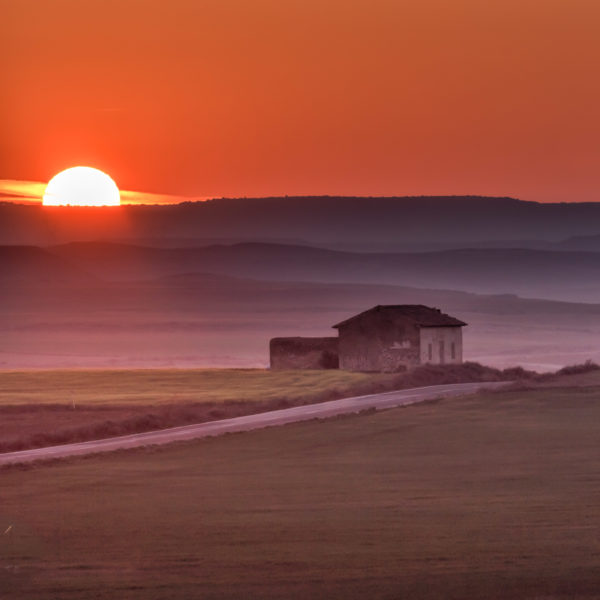 I hope you have enjoyed reading this blog. Let me know if you’re considering a photographic trip to Northern Spain and I’ll do my best to point you in the right direction.