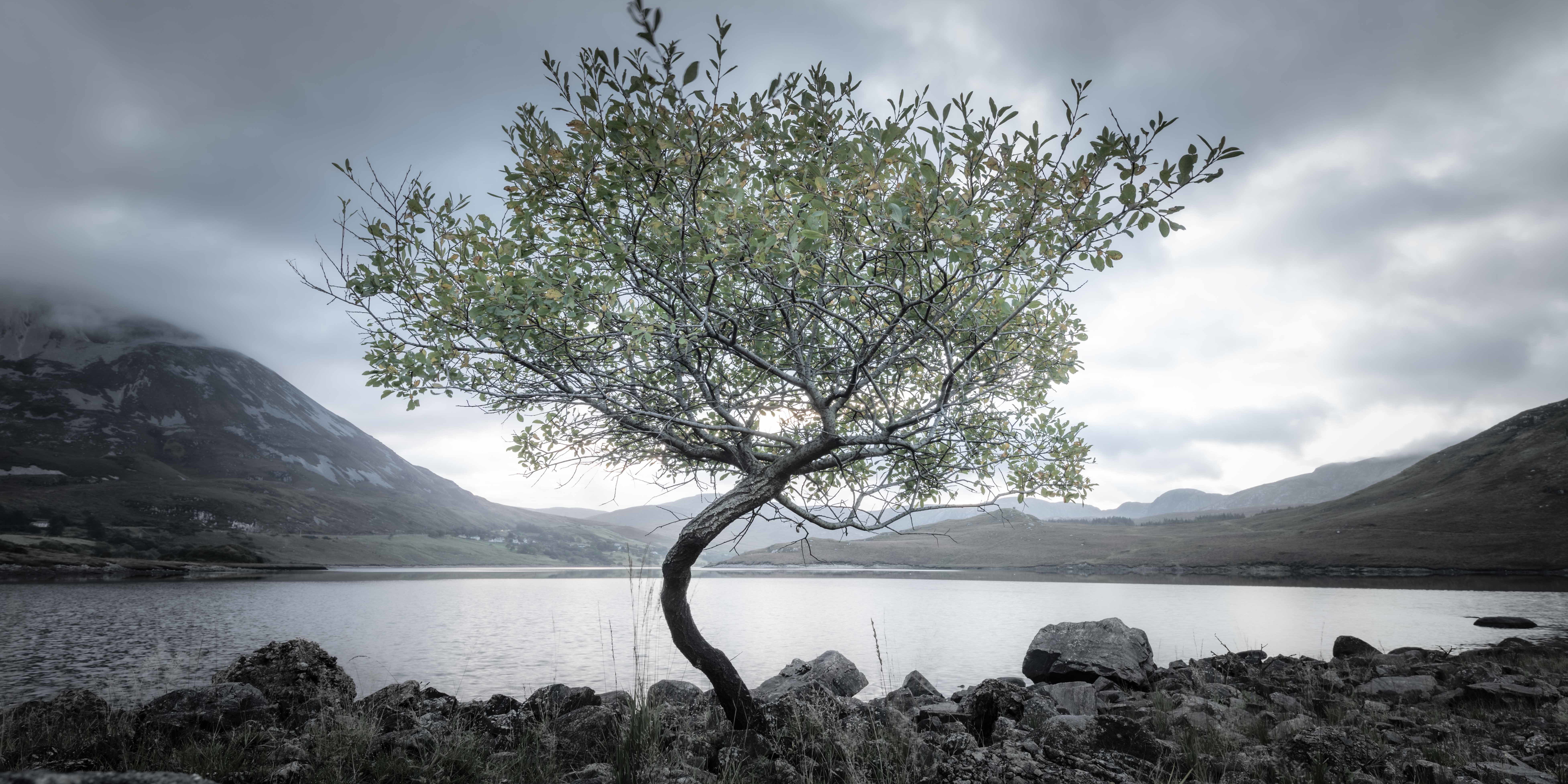 Dunlewey Lake rests under the looming presence of Errigal. The Poison Glen provides a western entry point into Glenveagh – a protected, boggy valley that deceives to end suddenly beneath granite cliff faces. The ruined church at Dunlewey is cradled between these two fine locations. As such, the area presents the landscape photographer with a number of subjects and compositional opportunities within a relatively small area.
Venturing south from Downings, where I had photographed the headlands of Fanad, Melmore and Horn Head (see previous blog), I arrived in Dunlewey under a bright sun on a warm mid-September afternoon. My first scouting mission was a search for some foreground to include in the sunrise shot for the next day. I have seen a number of images of small trees by or in the lake. It took an hour of so to find them – they did not give themselves up readily. A small dam separates Lough Nacung from Dunlewey Lough – the trees are found at the base of the dam facing Errigal. Unfortunately, the water level was beneath the base of the trees but it was still a viable option to use them in the scene. 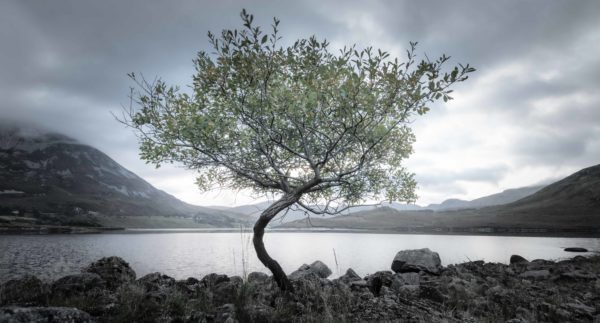 I subsequently continued across the dam to see what lay on the far side of the lake. The road comes to end shortly after at a wonderfully overgrown deserted village.
I was told that many of the locals had been brought up here but when the dam was built they moved away. I fought through legions of midges to capture an image and  though the light created good contrast I failed to encapsulated the soul of this very special place. Below is a image to give you a sense of the place. 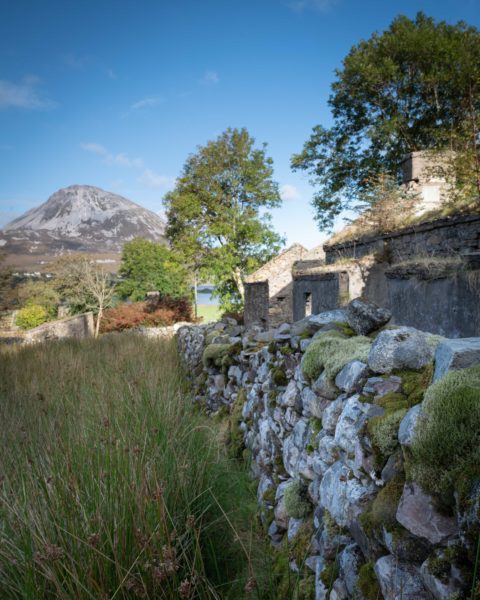 I was so absorbed I had almost forgotten I had nowhere to stay and booked into what turned out to be an excellent B&B run by the lovely Kathleen just above the church. All showered and changed at sunset there was not a cloud in sight and I wandered out into the marsh at the water’s edge to see if I could capture the church illuminated by the setting sun. However, I could not find an angle whereby the whole of the church was visible even though I have seen a number of images taken from this general direction. A quaint cottage belonging to a lady who was known locally as a practising witch is located on this path. She recently passed away but I was told that her circle of friends and visitors included Seamus Heaney, the Guinness family who have an estate on the far side of the lake,  Prince Charles and Camilla and Gerry Adams – what an eclectic collection – she must have been a fascinating person to know.
The next morning, some cloud briefly passed over the valley at sunrise – some promise in the sky. With the usual sunrise rush, I set up my camera and tripod  at the base of the selected tree by the dam but changed my mind at the last minute and moved to a simpler image of a large boulder sitting in the lake – Errigal being the main subject. The sky coloured up nicely, the lake was flat calm for a short while but the image lacks that special ingredient – a little mist would have been nice. 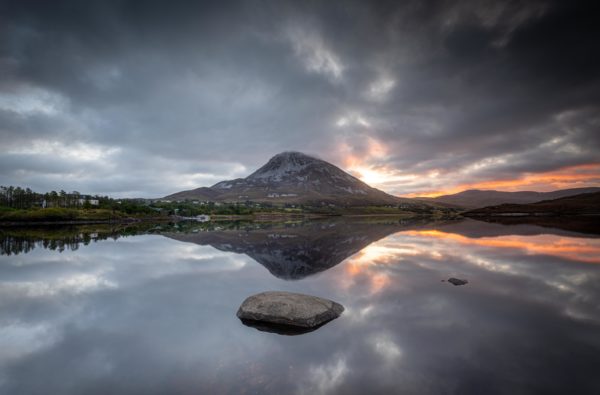 I packed up as quickly as possible and rushed across to the Poison Glen as I had scouted out some promising foreground in the stream to the left of the small pack bridge at the entrance to the valley. Unfortunately I was too late and the sun beat me into submission partly supported by an army of midges. Proceeding into the valley, some clouds came to the rescue directing shafts of light along the valley floor. I took a 4 image panorama as the valley floor lit up. Again, some mist or moisture in the atmosphere would have added so much more to the image but I’m not entirely displeased.

Following breakfast, I spent an hour or so discovering the lakeside before departing the glen and returning to the Donegal coastline for my next my sunset destination – the Crohy Sea Arch.
So here endith this little blog. My next jot of words include photographic attempts of the Crohy Sea Arch, Bunbeg and the Sheskinmore Nature Reserve. Join me then.