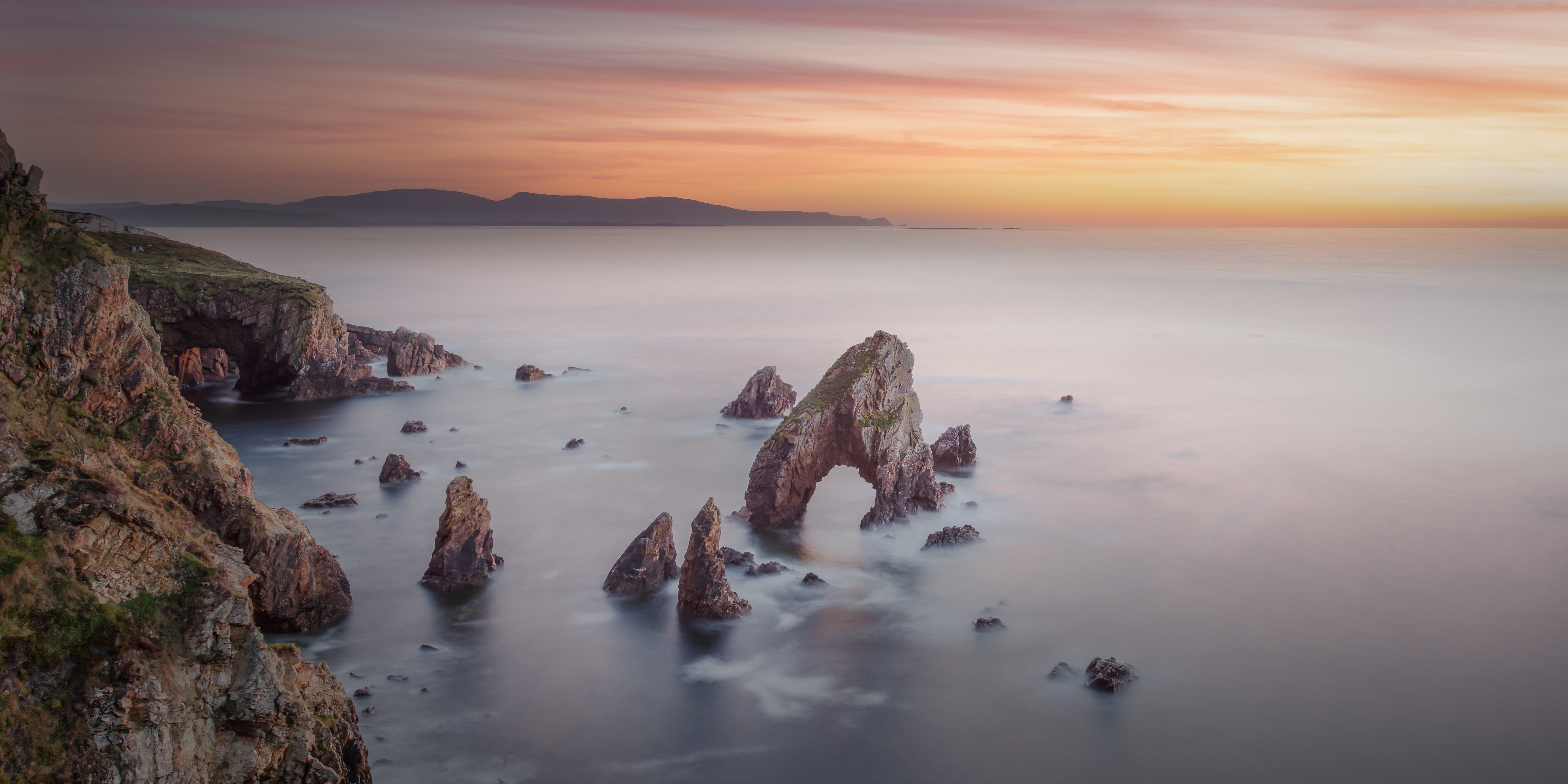 It’s a fortnight since I walked barefoot across the bay to the white dunes of Sheskinmore. The sun warmed sand softly received each footstep.  An Arctic Skua broke the near silence and harried a Comic Tern. The only other sound became apparent –  the surf resonating from the broad mouth of the estuary. No footprints but mine upon the sand. It is as pristine a landscape as I have experienced in Ireland.
A week of landscape photography often ends in fatigue particularly when age is no longer a source of endless energy. Here I was, on my 4th day. Afternoon naps were no longer having the desired effect. Creativity tied to fatigue had led to frustration. Yesterday morning, I was bounding around Dunlewey at 6.30am. The day that followed drained the battery completely. At Sheskinmore, I left the camera behind and was glad I did.
The Crohy Sea Arch was the planned sunset destination as I left Dunlewey but it was before midday and I needed a filler. Bunbeg lies en-route between Dunlewey and the sea arch. The “Bad Eddy” wreck is the reason landscape photographers visit Bunbeg, albeit not an altogether good reason. The wreck is afforded few sunset or sunrise time slots, just to prove that it is just that, a filler. Nonetheless, it is photogenic and it’s located in a pleasant bay in the context of a bay overlooked by a hotel reminiscent of Warsaw at the end of Cold War. Hardly a cloud in the sky. I slipped a super stopper (15 stops) from my filter pouch just to add a touch of effect to an otherwise plain image.

Onward to the main act of the day – the Crohy Sea Arch. This location is singularly good enough to warrant the trip to Donegal. It has oodles of potential and the afternoon light was shaping up nicely.
The sea arch is accurately pinned on Google maps at Knockfola. There is room for 1-2 cars along the narrow road and a small roadside sign and stile leads onto a sloping field and to the cliff edge.
There are good compositions accessible along the cliff edge but risk to life and limb is even greater than that offered by the rough, steep switchbacks descending to the small rocky bay directly in front of the monstrous arch. Light high altitudinal cloud was building slowly but the hours before sunset proved impossible to manage the range of light that the bare sun dictated. I flew the drone and rested briefly whilst waiting for the narrow window of time that sunset presents.
An adjacent bay presents an improved viewpoint whereby one can see the arch at it’s fullest width. The tide was filling and I knew that tip toeing through the surf to this bay could be a one way ticket. So I worked the scene available to me and identified 3 rocks at a diagonal to the arch as foreground. The challenge with the scene is that many large rocks in the foreground make a composition no easy feat. 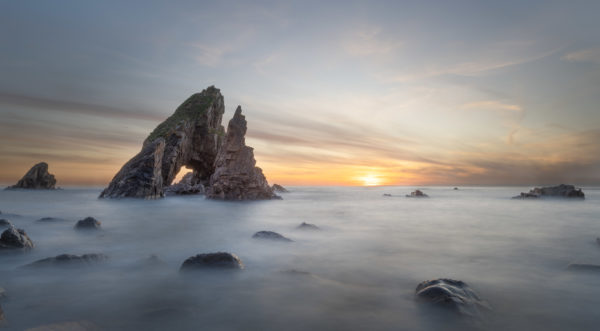 The bright sun complicated matters as it was difficult to see structure in the bottom half of the scene through the viewfinder or in live view.
Just after sunset, I clambered back up the cliff to capture a higher perspective but maybe I should have stayed as the post sunset colour intensified greatly. 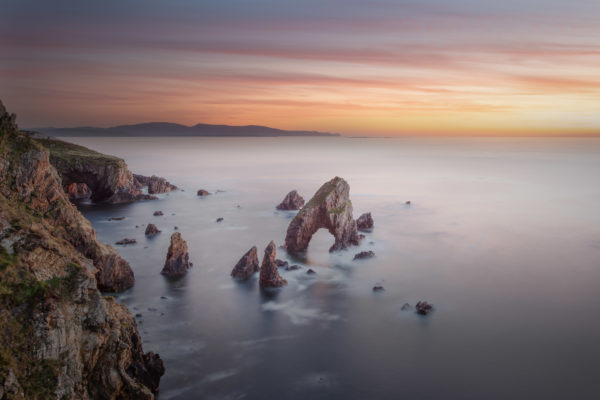 So presented here is the best of both views.
It was 9pm and I was well past my best but headed south nonetheless in search of a hotel. I managed a couple of miles before pulling in by the side of the road. I had enough energy to rearrange the contents of the boot and inflate the bed. Heating water on the stove was a step too far so the warm water left in my flask was poured on top of a freeze dried spag bol to create possibly the worst meal served in Ireland that night.
A 5am start and off to Sheskinmore. Mist sat in the marshy inlets as I drove on. I could have stopped and searched out a composition but set my sights on dunes at dawn. One wrong turn led to another. The dunes were not reached at dawn. When I eventually arrived, it was mid morning. I set off barefoot across the bay to Sheskinmore – a magical way to end this mini adventure to Donegal.