Each trip has a hook, a spark, the first thought that urges us to log on and book those flights. For Snaefellsnes in March 2017, it was not the world of Jules Verne’s Journey to the Centre of the Earth, nor the looming draw of Kirkjufell as a landscape photography icon. It was a bridge spanning the only entrance to a fjord and it was a fjord to where Orcas pass beneath the bridge to hunt. Most years.

But my first stop would be Kirkjufell – sunset, overnight in a rented campervan and aurora, well that was the plan. Enquiring as to how to operate the heater as I threw my bag into said campervan, I was informed that there was none in this model. Iceland. March. I don’t think so. So a two hour wait ensued whilst a heated van was prepared. And the sun went down on Kirkjufell an hour before I arrived. The best sunset of the trip – Murphy’s first law of landscape photography. Tired and hungry and not overly impressed that the small car park where I had chosen to spend the night was full of photographers, I literally rubbed my eyes when the green hues of the aurora spread invitingly atop the peak. A few quick shots before my body shut down  – the aurora will be there over the next 4 nights I told myself – never listen to a tired self! I awoke the next morning before dawn and found the car park empty. Heavy cloud and snow had moved in over night but I took the short stroll to above the waterfall and spent a couple of hours capturing images of the Kirkjufell. 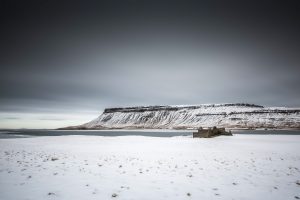 The orca watching trip I had booked was cancelled so a lack of plan B hit me with indecision and I decided to set off around the peninsula after hearing that the Orcas were not hunting in the small fjord this year. Indeed, it was also postponed on the following day which essentially meant I did two circuits of the peninsula. Just west from Kirkjufell the coastal landscape maintains it’s epic proportions. A deserted house with a mountain ridge as background warranted a stop by roadside. Above a majestic white tailed sea eagle glided past and joined 4-5 more on the distant ridge.

Further on at Rif, the road provides a convenient leading line to Ingjaldscholskirkja church. The wind was powerful and the light poor so a quick, simple image was taken, cropped to 1:1 and converted to B&W. 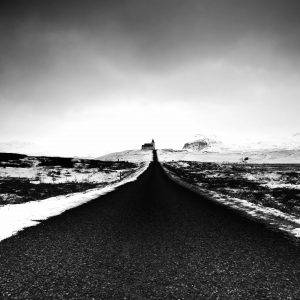 On searching for a seascape image at Ondesvarnes, a large male Orca dorsal fin appeared not 50 yards from shore as I was driving. So I spent the evening here, switching between 400mm and 14mm lenses. This area is mostly low lying volcanic rock with few beaches though there is one good beach on the way out to the large orange lighthouse. The cliffs at the lighthouse are very impressive though I couldn’t help thinking that orange just didn’t fit with the scene and combined with clear skies did not make for a compelling maritime image. On recollection, I would recommend bypassing the area to spend more time at Arnarstapi, Malarrif lighthouse which backs onto the spectacular Londranger and especially the area around Djupalonsanddur.

Making Djupalonsanddur Beach(Featured image above) at sunset, the power of the surge here and resultant noise of the black ‘pearl’ stones after which the beach is named is impressive and caution should be exercised. As the light was fading, I set up rather hastily and decided almost immediately to move back from the breaking waves. The light was as good as it got on the trip but in retrospect I should have given the beach more time. But a beautiful place and should not be bypassed.

Gatklettur is a stand alone sea arch in Arnarstapi. I arrived for sunrise in the hope of getting good light behind or through the arch. The arch is awkwardly positioned and it does not lend itself to a balanced composition. At the base of the cliff, a very wide lens is required. The sea spray here, tide dependent, is incessant. 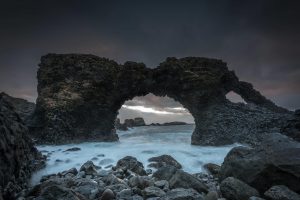 If only I had discovered the marvel of Zeiss wet wipes before I departed for Iceland! Most of my images of the arch were poor – light, composition and sea spray conspired against me. Closer to the harbour and within a short walking distance from Gatklettur, a second arch popular as a selfie spot is a novelty, as is the large blow hole. I walked most of the way along the cliff path to Hellnar and there are good sea stacks and coastal panoramas to be had on this walk. It was almost midday and not a cloud in the sky. But a bonus was a mobile fish and chip shop on the way out of the village. 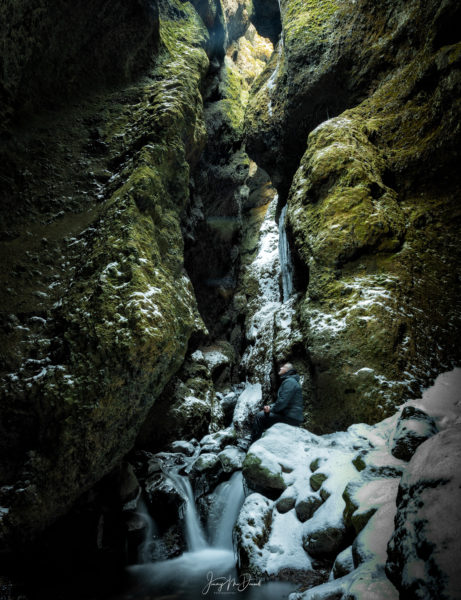 Not far from Arnarstapi is a narrow cave. Photographing inside the cave is challenging as the space is restrictive and a number of people were also there. I would recommend bypassing this site if time is of the essence. Late afternoon, the sky still blue I made a sunset beeline for Budir church. Retrospectively, I could  have stopped a number of times as the road opens out to the southern side of the peninsula to reveal spectacular vistas. Even though I have seen many images of the church, composing an image requires some time here. There are are essentially two approaches: as Father Ted once said near and far away. A good sky is better if the church is used in a lower third, so I opted for the latter. If Zeiss wipes were my first lesson of the trip, careful use of a polariser at wide angles was the second – note that in bright light a polarisation anomaly is hard to spot on the camera’s LCD. If in doubt, take it out!

Staying the night near Ytri-Tunga, I could just about make out the silhouettes of seals in rest on rocks at low tide as darkness descended. A long day prevented me from staying awake too long in anticipation of aurora activity. The next morning, I took the icy mountain pass emerging close to Rif and back to Grundafjordur. Whale watching today! The boat was quite full and despite best efforts no ceteceans were seen. I told the crew about the two orcas at Ondesvarnes and the next day their Facebook page revealed they were still there. To be honest, I relished getting back into the camper van and heading back into the relative isolation of of the landscapes of Snaefellness. 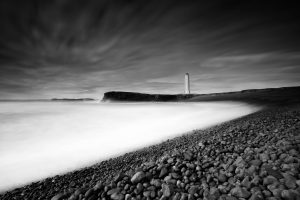 I arrived at Malariff lighthouse in bright sunshine and oddly enough with no water and thirsty. There are no streams and no shops in the National Park. Basic needs etc, I was more thrilled to get a kindly fill of water from the manager of the interpretive centre there. In the far distance, humpbacks were breaching, but I was sizing up a composition of the lighthouse. The curve of the bay leading to the structure ends at a spit where the tide encroaches from two sides and care is required here. I had few options in the midday sun so a 10 stop ND filter with a B&W image in mind to bleach the choppy sea was in mind and the resultant image was better than I had envisaged.

Snaefellsnes is a mini slice of Iceland. Spending 4-5 days here may seem like too much time to some when there is so much more to see in Iceland. But photography requires much time at each place to wait for light, to compose and just to relax and take it all in. I would like to return someday as I really only touched the surface and maybe next time the killer whales will be entering the fjord at sunset and posing for a portrait!

I hope you’ve enjoyed reading about Snaefellsnes – please comment below and If you are thinking about going I would be more than happy to share what information I have.