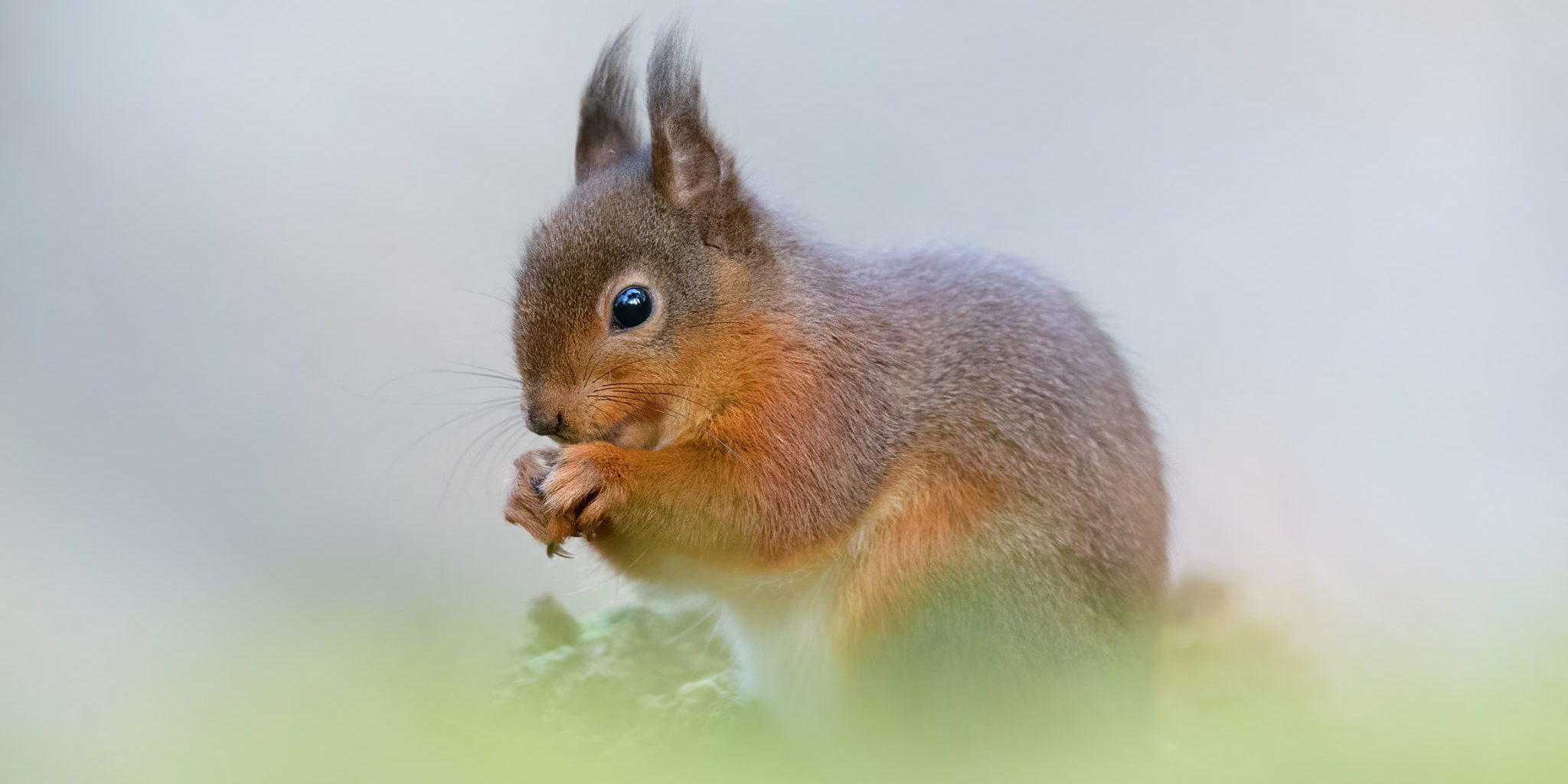 Eurasian Red Squirrels are diminutive, skulking mammals with an extensive range from Ireland through Siberia to Japan. They are very photogenic and have that cute gene that really shouldn’t be a winner when it comes to evolution. Over many years I have collected many poor images of Red Squirrels clambering up a tree or scampering out of sight across the woodland floor. Determined to capture this beautiful creature properly, I set about scouting an equally beautiful backdrop to the envisioned image. Restricted in my movements to 5km from home during the pandemic, I was not overly optimistic. Occasionally I did encounter Red Squirrels in a local mixed woodland but they usually spot me first and scamper high into a pine tree from where I’m scolded with a “tuk tuk” warning call. 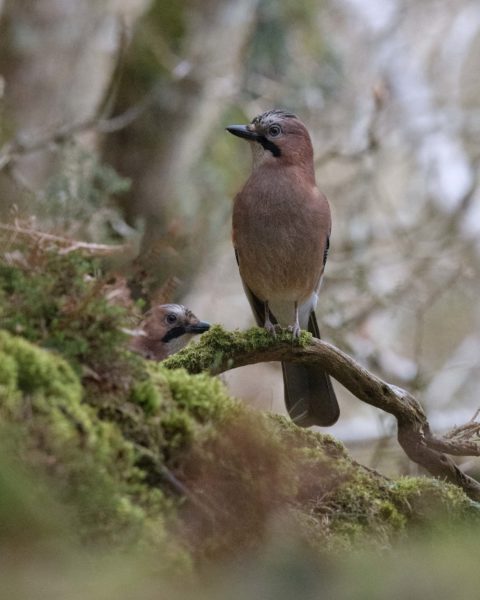 It is not surprising that Red Squirrels are so averse to human company. Following the last ice age, Ireland was slowly transformed into a vast, pristine woodland with extensive stands of magnificent oak trees. Although clearing of the forest commenced with the arrival of the first farming settlers in c.4000BC, it was not until the 17th century that mass deforestation occurred stripping Ireland of it’s ancient woodland to supply various industrial projects in the UK and further afield. The destruction of the Red Squirrel’s habitat in tandem with extensive hunting for squirrel pelts to supply the furrier trade led to it’s near extinction in Ireland. Ironically, Irish oak was used to rebuild London after the great fire of 1966 and when landowners attempted to repopulate the last stands of Irish woodland with Red Squirrel, some were sourced  from the streets of London – as live animals were traded there at that time. Further, the strain of DNA from those London bought squirrels are only found in Ireland today! The recent history of the Red Squirrel in Ireland is sadly a continuance of the hardship these little souls had previously endured but with a little light at the end of the tunnel. In 1911, an American Grey Squirrel was introduced in Co Longford. It carried a disease, the parapox virus, harmless to itself but deadly to the Red Squirrel. As the Grey Squirrel spread through the land, the Red Squirrel population was decimated.The 1976 Wildlife Act in Ireland protected both the Red Squirrel and a predator that the Red Squirrel was well used to –  the Pine Marten. The introduced Grey Squirrel was naive to this predator having no experience of it from it’s original habitat in North America. As the Pine Marten slowly extended it’s range across Ireland, the Grey Squirrel population was reduced and the wily Red Squirrel has reclaimed the scattered last stands of woodland that remain.

So getting back to photography! A hide was needed and I readily employed my newly acquired Dragopan V6 – but where to set it up? I identified a general area in the wood where a Red Squirrel was present. Knowing that the Red Squirrel spends much of it’s time foraging, I searched out a photogenic setting, with a moss covered surface and deciduous trees adjoining the pine wood for better light. I carefully placed unshelled hazelnuts beside moss covered rocks or mounds. 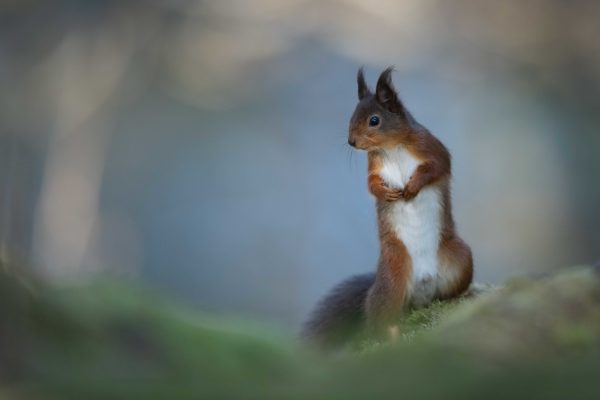 I attached a Victure Trail Cam to a tree opposite where the nuts were scattered and left it in place for 2 days and nights. I returned with low expectations. The hazelnuts were all gone but what had taken them?
I took the trail cam home and was delighted to find some videos were taken, the thumbnails revealed both night and day videos. The first night video I opened revealed a pine marten passing through, a mammal I had never seen in Ireland or never seen clearly enough to verify identification.
And the first daytime video revealed my target subject – the red squirrel. I now knew the Red Squirrel was visiting my forest “studio”. And so I carefully set the hide up ensuring that camera angles were considered and the viewpoint provided a number of attractive foreground scenes.

It took a number of visits before I caught sight of my first Red Squirrel. After 4 hours in the hide it stayed for 5 minutes, gobbled a few nuts and scampered away. I decided that I would return every 2-3 days and leave the trail cam in place. The trail cam revealed that the squirrels were most active 2 hours after sunrise. And so I visited at this time of day. The frequency of sightings increased. But getting that dream image was proving trickier than I had expected. The squirrel would stand behind some bracken, behind a mound or where a small branch would partially obscure the view. He was aware of my presence despite best efforts to remain still and unseen within the hide. Moving the camera lens would unsettle but not deter him. On each visit I placed the nuts more carefully so that the foreground and background to the image were as photographically clean as possible. For a brief moment the squirrel stood upright facing the hide and looked to one side. Click. My first decent image(to left)! Over the next 1-2 weeks I moved the hide 2-3 yards to the left and right to change the options slightly. I also carefully placed some nuts among the pine needles of a low hanging Scot’s Pine so as to capture the squirrel there and he duly obliged(image to right). 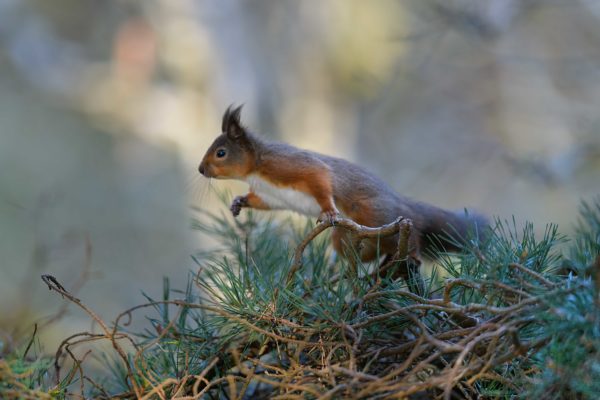 The trail cam also revealed a host of other visitors to the area: Fallow Deer, Red Fox, Pine Marten, Raven, Jay, Long Tailed Field Mice and Long Eared Owl who no doubt dined on the poor mice. Knowing that these wonderful species had been visiting overnight further encouraged more frequent visits.Additionally, I visited very early in the morning, well before the Red Squirrel was out of his drey!  One small challenge I encountered was that each morning, many of the nuts I had left the previous evening were taken overnight . So instead of stealthily approaching the hide from cover I would have to enter the forbidden zone (where my forest friends would feel at ease) to place the food. However, I found the squirrels would arrive within an hour, the jays being much slower and more cautious. I am still awaiting my first pine marten sighting but on one morning the Red Fox showed. My camera lens was luckily pointed in the right direction. But he was on to me in no time, took some nuts and fled. But to my surprise he returned, kept to the far end of the area and stayed for about 5 minutes – just enough time to take a few images.

The camera equipment used was a Nikon D850 and 400mm 2.8 FL Nikon lens. The visible photographic area was about 15-20 metres in length so a 200-400mm may have been a better option. The dim light at dawn and dusk when overcast, even though the woodland was open to good light on one side, meant I was shooting at f2.8, c.1/800 sec to keep the ISO below 10000. Otherwise in partial sun I had aperture options upto f8.  However, I do prefer to shoot at f2.8 for the bokeh alone but this results in probably more “could have been” shots. 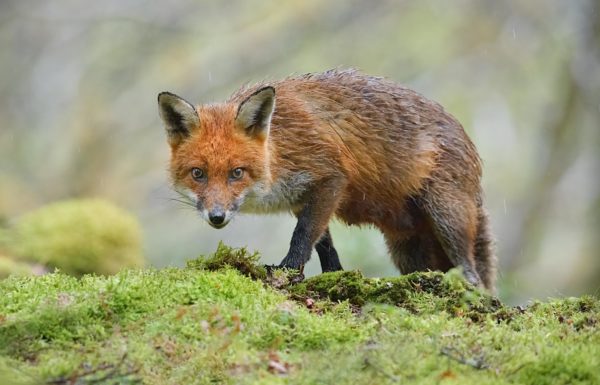 I set the hide up for a week or so, then 2 weeks passed, then a month and I’m still there 6 weeks later. I’ve taken to leave my tripod and video head up there to save on carrying home. Expectations rise – the first close up images were thrilling, then you see fault, then you get that special image then you wait a week or more and no images can match those damned expectations. But I return again and again. When it’s quiet and I see nothing I think I’ll pack up and find a new project. But then I remind myself of how special this place is – the moss covered rocks, the stunning Scots Pine that looks over the hide and the how the wood falls into silence for hours at a time. But before I do pack up, I would give anything to take just one average image of the pine marten!

I hope you’ve enjoyed reading this short blog. If you’re thinking about hide and/or wildlife photography be sure to drop me a mail. I would be more than happy to help out with some advice from my experiences.