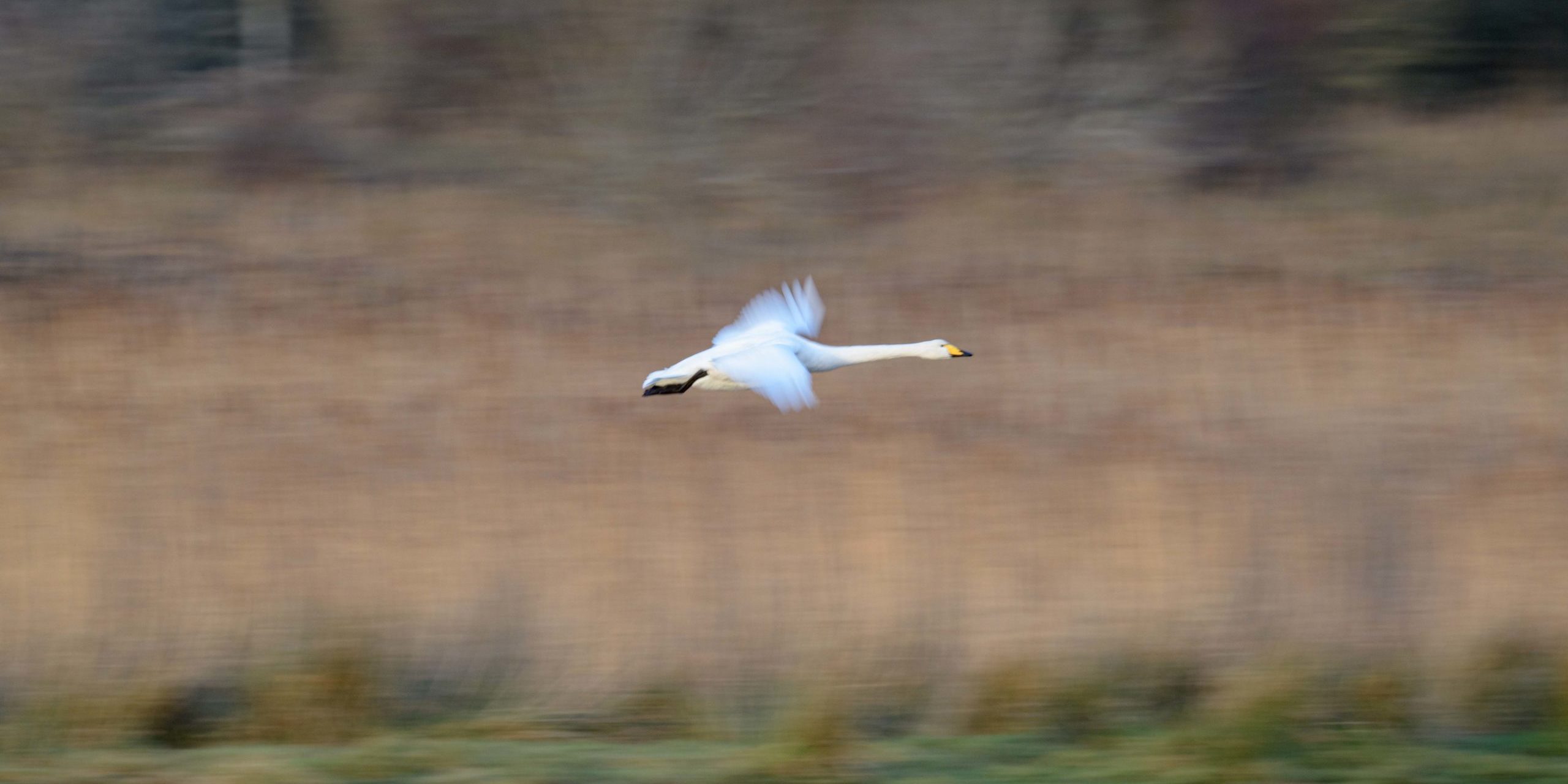 A winter wetland has always held a special place in my heart. A unique wildness derived from the winter wildfowl that visit from the remote Arctic landscapes, birds of prey drawn to harry prey during the short, cold days – the nervousness of wildfowl feeding anxiously – ready to take flight as a menacing shadow passes overhead. The constant calls of the tight groupings of wildfowl add another dimension to the scene. The whoop of the Whooper Swan, the honk of Greylag, the whistles of Wigeon and Teal. The looming silence of the Hen Harrier is timed to add chaos as duck take to the air in one location and the next – charting the course of the harriers flight. There is almost too much happening – feeding, hunting, roosting, courting, flight – all played out in constantly changing meteorological events – freezing, flooding, howling winds, sun filled, calm days and grey, rain filled weeks. The wildfowl arrive in small numbers from October and gradually the autumn wetland transforms from a lush, quiet, peaceful habitat to an action packed winter wildlife showcase. By April, the birds have departed on a northbound and perilous journey to their Arctic breeding grounds. 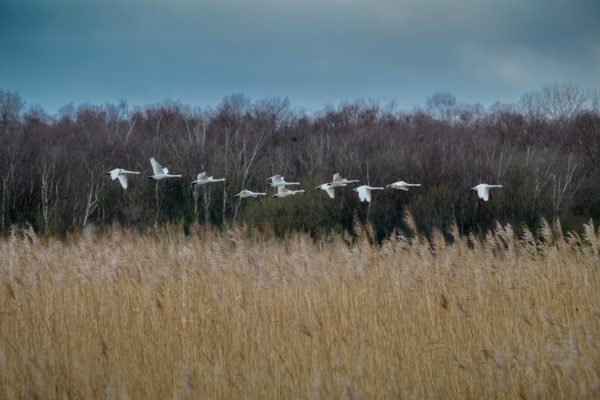 On New Year’s Eve of 2020, I paid a visit to the East Coast Nature Reserve to observe and photograph the flight of the Whooper Swans on their dawn flight from the flooded coastal fields to feed on the surrounding farmland.There are many collective nouns used to describe swans – “a whiteness of swans” for me is the perfect descriptor. Whoopers roost and feed together in large numbers. Within that “whiteness”, family groups stay together, the parents keeping a close eye on their siblings. Each family group depart for the feeding fields each morning, one of the parent swans will honk and bob their head, the others will join in. This ritual may be repeated several times. It is clear that the flight of a family of swans is an activity carefully undertaken. It is fascinating to watch the intensity of calls increasing in tandem with the bobbing of heads until one swan, then another begin the long charge across the water’s surface until the transition between water and air is gained. Family by family the swans depart for the day, they regroup in a field or in a number of adjacent fields until dusk signals a return to the safety of the roosting area – the same flooded, coastal fields from which they departed at the dawn of day. 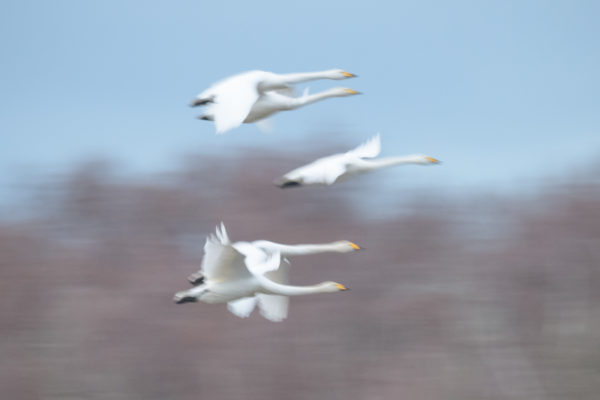 I did not intend to return to photograph the swans after my first on the eve of the New Year but was subsequently drawn back, enticed and enthralled by the dawn flight. This became my January ritual, a photographic project per se.

How to capture this wonderful event in a still image? My initial attempts were limited to standard sharp images of the swans in flight.  As the month passed, I paid more attention to the habitat and objects along the flight path.I studied the pools of water in the coastal fields, the untidy grass that separated the water from the phragmites in the fen, the stands of birch wood and how they absorbed the light of the rising sun. And each morning I positioned myself 20 -50 metres along the flight path, paying close attention to the scene were I thought the swans may fly past. On some mornings the swans were absent, or they flew in the opposite direction – but I learned that they take off into the wind and therefore I could gamble on the correct position to capture them in flight. Some images were taken whilst they were running across the water. However, I preferred images taken as they gained height with a mix of phragmites and birch wood as backdrop and this determined where I positioned myself on the following morning. 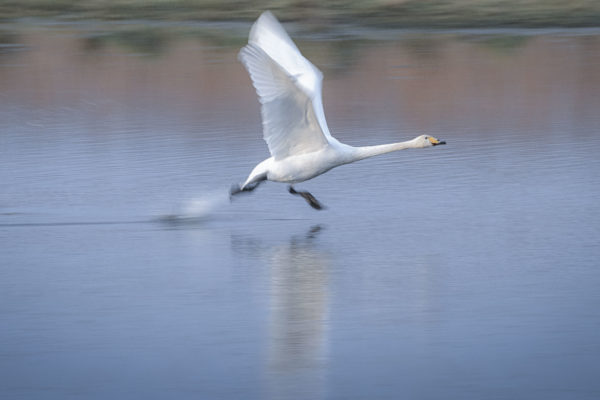 Early in the month, I inadvertently set the exposure to 1/30th of a second. The scene, as the swans flew past became blurred as you would expect but was extremely beautiful and so I decided to persist with the slow shutter speed.
Panning the camera in the direction of the flight resulted in a relatively sharp head/neck/torso but blurred wings – as the wings were moving at 90 degrees to the pan. However, such images were only possible as the swans flew directly in front of the lens. Each morning I would preset the camera to 1/60 sec, Auto ISO, GRP autofocus and EV -0.5 to 1 to compensate for the light reflecting off the swans. I soon released that the brief, daily moment when an exposure was feasible was consistently ruined by a poor panning technique.The excitement of the flight got to me each time and my jerky movements resulted in totally blurred images. So before the flight I would practice a steady pan. But to no avail and very few images, if any matched the images I had envisioned. 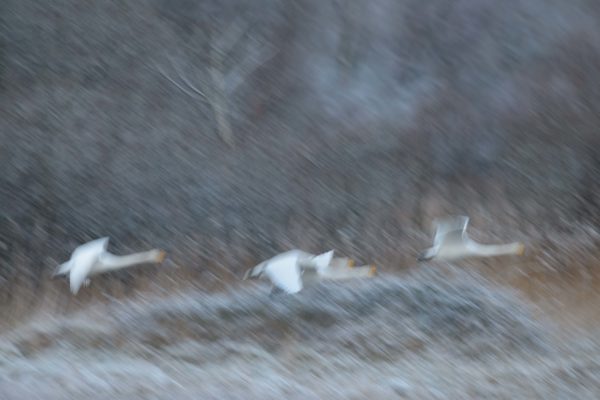 As January drew to a close, I realised that my swan obsession may turn into a love/hate relationship as I had failed somewhat in capturing these magnificent creatures as I hoped to. Nonetheless, it was time to move on to another project. I concluded that the gimbal head I was using moved too fluidly and like a workman who blames the tools of his trade I ordered another tool – a video head with variable resistance so that my panning action will be smoother. I have moved on to another project for now, I may have another few tries before the swans return to Iceland in April or I may wait until next winter. Samuel Beckett once said “Ever tried. Ever failed. No matter. Try again. Fail again. Fail better.”. I’ll wait for a time, maybe tomorrow, maybe next year when I try to fail better again.