Photographing insects in the field demands higher shutter speeds, a steady hand and a smaller aperture of c.f9 to ensure sharpness. On warm summer days, insects are mobile and easily found. However they provide minimal opportunities to carefully compose an image – they are too busy flying, feeding and living life. Choosing a complementary background for the image is a rare privilege afforded by the insect to the photographer. Nor indeed, can the photographer hope for good quality light which most often occurs in the hours around sunrise and sunset when the insects tend not to fly.

From time to time, we may have our patience rewarded by an insect settling momentarily between feeding or hunting. To unfold a tripod and compose an image we are too aware that this fleeting moment will pass in a breath – so we work promptly and hope for the best. Insects tend to frequent habitats with rich growth – a hodge-podge of contrasting highlights and shadows detracting rather than complementing our busy subject. My least favourite backdrop are the leaves of fleshy or woody stemmed plants such as bramble, iris and thistle – no matter what the insect’s colouring, mixed green foliage is too overpowering a background colour.

Even when a relatively pleasing background is found, shooting at a smaller aperture(c.f9) whilst succeeding in capturing the insect’s sharpness may also capture the background as a chaotic mix of overpowering sharp

/unsharp vegetation. I tend to avoid such areas and choose habitats that offer a softer background such as meadows or clearings where the vegetation is interspersed. This tends to result in a cleaner, more pleasing image.

So how can we capture sharp images of insects with good light and a background that makes the star of the show shine? Well it’s quite simple. Here in the northern hemisphere, Ireland to be specific – insects enter a torpid state overnight alighting on grass or rush stalks in a meadow at sunset. Here they can readily be found in the hour after sunset or the following morning.

The early morning dew adds magic to the scene and so I prefer that time. The insect cannot move in the morning until the sun warms its body. So rather than chase insects in the heat of day with mixed results, set your alarm clock for a very early start. Once you find an insect in the dim morning light, calmly set up a tripod, pull up a portable seat, focus and toy around with camera settings – whilst enjoying a hot cup of coffee from the flask. The insect will not move. If a heavy dew has accumulated overnight, the body and wings may glisten – resembling a Swarovski necklace – choose the butterfly or dragonfly design! This is quite a spectacular natural wonder.

Time is now our friend. The insect is static. And so it’s time to bring more magic to the scene by opening up the aperture of your best fast prime. 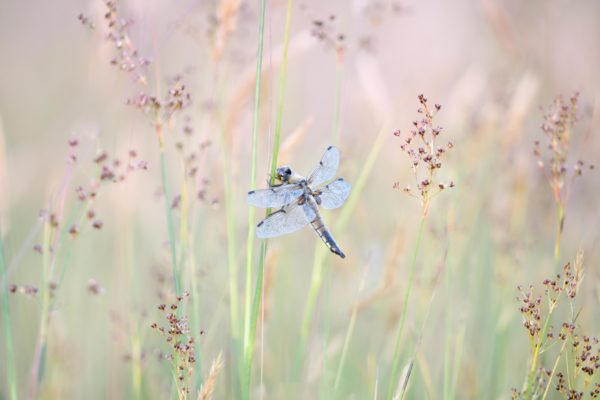 This year, I have been using a Zeiss 135mm f2 APO Sonnar lens rather than my Nikon 200mm f4 Micro and it provides the following advantages;
1) Using an aperture of f2 rather than f4 renders the background foliage/grasses as pure, unadulterated bokeh – beautiful 2) The insect, rather than being lost/indistinct/blended into the background – now dominates the scene. 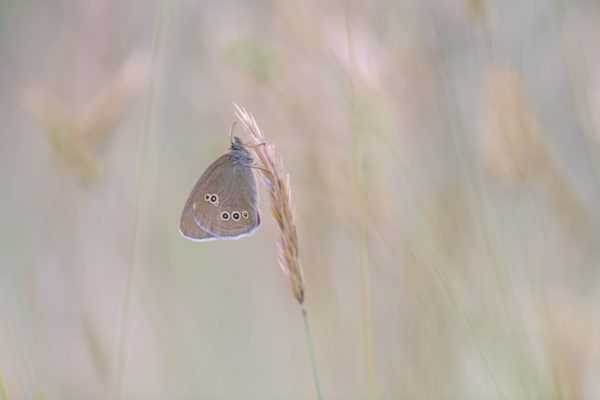 There is one challenge – handled better by some camera/lens combinations. And that challenge is a result of shooting wide open – only a portion of the insect will be in focus in a single exposure – so multiple images are required. Focus on the closest wing tip and work slowly back – taking 2-8 images dependent on the angle of the insect in respect to the sensor. Knowing that the insect will not move is a great advantage. The only other consideration is to choose a relatively windless day.

To complement this approach I experimented with providing the background much more space within the frame than the subject. Obviously the background needs to be filled with quite beautiful tones to make this work well. Simply put, the question I asked of myself was  – how small can the insect be in the frame without being unrecognisable as the subject of the photograph? Well – very small is the answer that I have deducted – but this is dependent on having a very featureless, pastel background – see photograph below. So the resultant image is one of the subject totally enveloped in its habitat.

My post processing workflow is quite simple. In summary, I use Camera Neutral profile (Nikon) in Lightroom. As a general rule, I tend to very slightly cool the temperature and then add a hint of magenta via Tint – but this depends on the original temperature of the image. The objective is to have a range a warm and cool tones. I open the image in Photoshop CC, duplicate the layer. Here I work on removing any distractions from the background – overly dark foliage (dodging) and removing distractions such as stalks of grass etc. via Content Aware Fill to simplify the scene. If the background is too strong, I dodge using a colour rather than luminosity mask via Tony Kuyper (TK7) panel. Where the  insect requires to be lightened or darkened, based on personal preferences, the Select Subject function works very well – just add a mask that will automatically apply the adjustment to the selection. And that’s it.

If you would like further information, please watch the video linked in this article. Thanks for reading and if you do watch the video and like it, please subscribe to my YouTube channel. Until next time…..