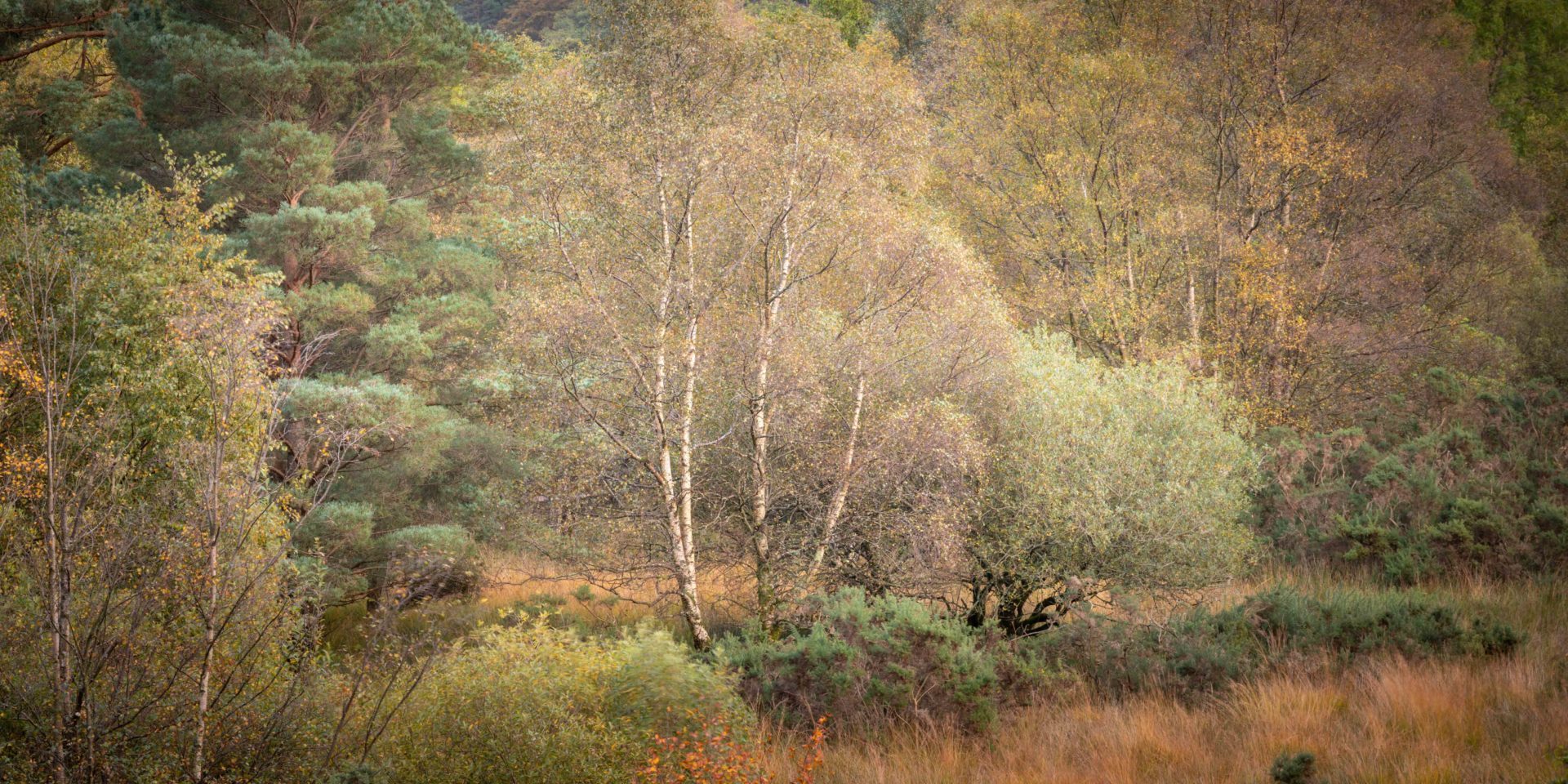 Each September, I set out to capture autumn colour in photographs and each September I’m surprised to find no autumn colour – only a worn out post mid-summer green. And each subsequent weekend reveals a slow burn to autumn gold. So next autumn, I’ll set my alarm clock for Halloween.

When the clocks go back – that is the time to reap the best of what autumn has to offer.
It is then that the warmest browns of mountain heath and softest beige of marram grass, the golden hues of birch and subtle umbers of oak blend to put on an unmatched landscape display.

But what to photograph in this narrow window of time? Well, that is a dilemma. The wild landscape sports a rich coat returned to earth not long after it has been tried on. Waterfalls in wooded glens, a stand out tree perhaps, a macro of fallen leaves or a standard sunrise where land competes with sky for colour.

Working a small area and slowing down will result in a more fulfilling outing and let’s face it, better images. However, places that would not warrant a second glance in another season now cry out for attention – so it is always tempting to stop, shoot and move on. I confess that this autumn I indulged in a little of both.

Here is a summary of my ventures out this autumn, mainly to the Wicklow Hills in Ireland. I hope it provides some indication of how the landscape changes from mid October onward. 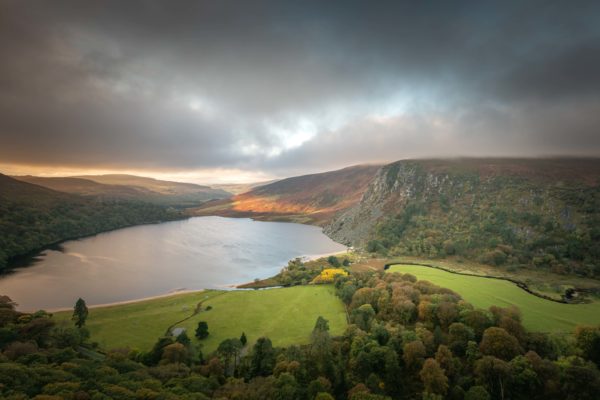 I started the morning with a sunrise shoot at the northern view point over Lough Tay – close to the turn in the road at the bridge. Here I managed to smash both polariser and 6 stop ND filter when neither were required for the shot. Nonetheless, as the light entered the southern end of the valley towards Lough Dan I captured the image opposite. There is some autumn colour here particularly highlighted by the shaft of warm light left of centre. Additionally, I find that this time of year delivers the most dramatic sunrises and sunsets.

Cloud descended not long after and I proceeded to the Sally Gap cross roads. The view to the Coronation Plantation then opened up. Low cumulus raced across the slopes and shafts of light highlighted one area of heath after another. I pulled over and took a number of panoramas – compositions identical but highlights scattered randomly in each image. A woman cycled by at speed and called out ” Great light”. I smiled. Indeed it was.

Home for breakfast, a few household chores and out again to Laragh for the hour approaching sunset. The board walk running east from the upper lake offers good autumn colour and the promise of a still lake. The valley descends into shade a good 45 minutes before sunset. 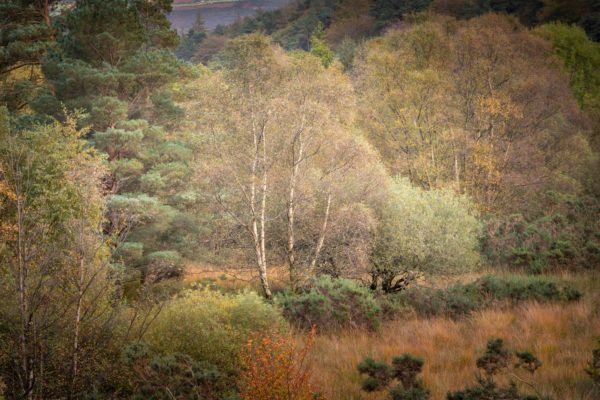 The last of the light was evident as shadows blotted out light patch by patch. A composition caught my eye and I waited until the light caught the golden leaves of a grove of birch.

Venturing around to the lake, the muted light was good. I took a shot but on returning to this location the following week better conditions were on offer.

October 27th, Monday
The clocks went back, a 7am sunrise instead of 8am. I didn’t pack the night before and between the jigs and reels arrived back at the lower lake in Glendalough late – after sunrise. A mist swept across the lake. I found a spot I have used before with just the right angle for both the breadth of the lake and for the mixed wood running along the southern edge. 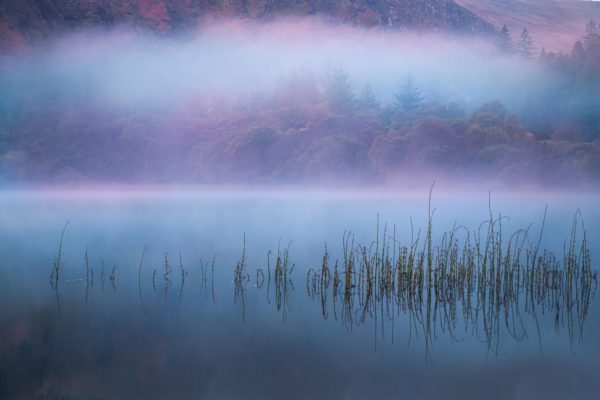 And there I stayed – quite content for a couple of hours in the good company of a fellow image maker.The mist rolled across the lake at pace but surprisingly the water remained like glass. Horsetails provided a good foreground for the image opposite.

November 2nd, Saturday
Morning – approaching the Vartry Reservoir from Newtownmountkennedy conditions looked abysmal – clear and windy with a harsh light. A thin swirl of cloud circled Djouce above. Arriving at the Pier Gates, I turned my fog lights on and parked just beyond. A thick band of low cloud engulfed the Sally Gap. Standing at the cliff edge overlooking Lough Tay once again, the low cloud swished by (it does have a sound all of it’s own landscape disappeared and reappeared.

Freezing cold following milder wind. As the sun rose and pierced the lower slopes of Luggala, I took yet another panorama with a 135mm lens. Good numbers of Ravens held still into the wind – they appeared to enjoy the scene as much as I.